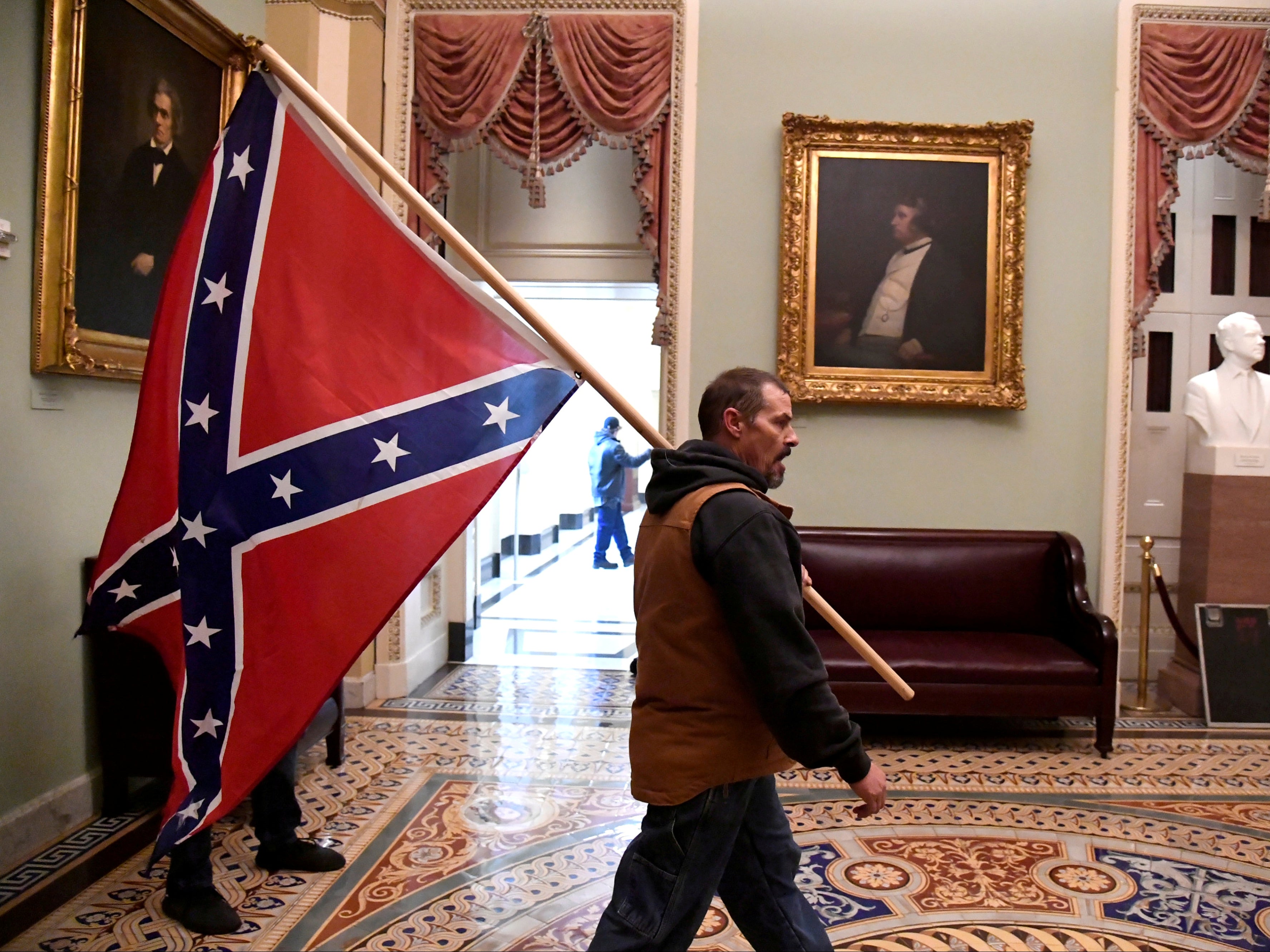 Capitol riots: What is domestic terrorism, and why are politicians using that term?

A mob of pro-Trump rioters breached the US Capitol on Wednesday, forcing staff and lawmakers to barricade themselves in offices and take cover under chairs in the House, in an incident several officials have described as “domestic terrorism”.

The last time the US Capitol was breached to the scale of Wednesday was back in 1814, during the War of 1812. During that breach, British troops set fire to the Capitol and torched several offices.

The Capitol was also breached in 1954 by several Puerto Rican nationalists, who fired on House members, wounding five of them, according to Business Insider.

Wednesday’s mob of thousands of pro-Trump rioters breached the Capitol Building during the confirmation of Electoral College votes, putting a hold to proceedings to confirm President-elect Joe Biden’s victory for several hours.

The House was evacuated as numerous lawmakers and staff members were forced to barricade themselves in offices to hide from rioters, some of whom were carrying guns and other weapons.

The rioters breached the Capitol after attending a rally for Mr Trump, where he incited the insurrection with a speech, saying: “We’re going to walk down to the Capitol” and adding: “You have to show strength, and you have to be strong”.

This caused numerous US representatives and law enforcement officials to describe the riot and breach as domestic terrorism, but not everybody agreed with the use of that term.

What is domestic terrorism?

Domestic terrorism is defined by the FBI as “violent, criminal acts committed by individuals and/or groups to further ideological goals stemming from domestic influences, such as those of a political, religious, social, racial, or environmental nature”.

This definition is influenced by the Homeland Security Act, which states that domestic terrorism involves an act that “is dangerous to human life or potentially destructive of critical infrastructure or key resources and is a violation of the criminal law of the United States”.

The definition also states that domestic terrorism involves an act that appears to be intended to “intimidate or coerce a civilian population, to influence the policy of a government by intimidation or coercion, to affect the conduct of a government by mass destruction, assassination or kidnapping”.

Numerous attacks and plans in the US over the past 60 years have been referred to by pundits and law enforcement officials as domestic terrorism incidents, most recently the planned kidnapping of Michigan governor Gretchen Whitmer.

The Charlottesville car attack by James Alex Fields, which took place during the Unite the Right rally in Charlottesville, Virginia, in 2017, was also referred to by many as domestic terrorism.

Like all definitions of terrorism, there is not one universally accepted term, however, definitions often state that an act can be considered domestic terrorism when victims are targeted by perpetrators with the same citizenship as them.

What have officials described the riots and breach of the Capitol as?

Several US lawmakers described the riot and breach of the Capitol as domestic terrorism in the aftermath of the events on Wednesday.

Republican representative John Curtis, Utah, condemned the events at the Capitol on Wednesday, describing them as an “act of domestic terrorism” while putting the blame squarely on President Trump.

In a statement on Twitter on Wednesday night, Mr Curtis wrote: “My anger continues to grow over today’s desecration of the United States Capitol, our nation’s home. What happened was an act of domestic terrorism inspired and encouraged by our President.”

The events were also condemned by several other lawmakers from both the Democratic and Republican parties, as Democrat Marc Pocan of Madison, Wisconsin, also blamed the president.

“It’s a sad day for America when the president is inciting domestic terrorism and acting so incredibly irresponsibly because he is not happy he lost the election,” Mr Pocan wrote on Wednesday evening.

Despite the widespread use of the term, not everyone felt that the riots could be described as domestic terrorism, as former CIA director John Brennan told BBC Radio 4’s Today programme that the events did not qualify for use of that term.

Mr Brennan raised concerns about what might happen in Mr Trump’s final two weeks in office, but claimed that the breach on Wednesday was not dometic terrorism, as he did not think it was carried out by a “political or idealogical group”.

He said on Thursday morning: “People are referring to it as insurrection bordering on sedition, riots, violent riots, a breakdown of law and order.

“I don’t consider it as within that bracket of domestic terrorism in terms of something that is undertaken as an act of violence by political or idealogical group.”

However, because the riot and breach was directly provoked by Mr Trump’s rally, where he made numerous false claims about the election being stolen, and during the confirmation of electoral votes, several prominent media outlets described the events on Wednesday as domestic terrorism.

Many of the rioters wore clothing emblazoned with “Trump 2020”, as flags bearing the president’s name were seen among the thousands of people breaching or congregating outside the Capitol on Wednesday.

Several police officers were injured by the mob, as the rioters attempted to stop the certification of Mr Biden as the 46th US President.

Speaking after the joint session to confirm the electoral votes was restarted, Senate Minority Leader Chuck Schumer condemned the breach and riots, calling it the “final terrible, indelible act” of Mr Trump’s presidency.

He added: “Those who performed these reprehensible acts cannot be called protesters. No. These were rioters and insurrectionists, goons and thugs,” before describing the mob as “domestic terrorists”.