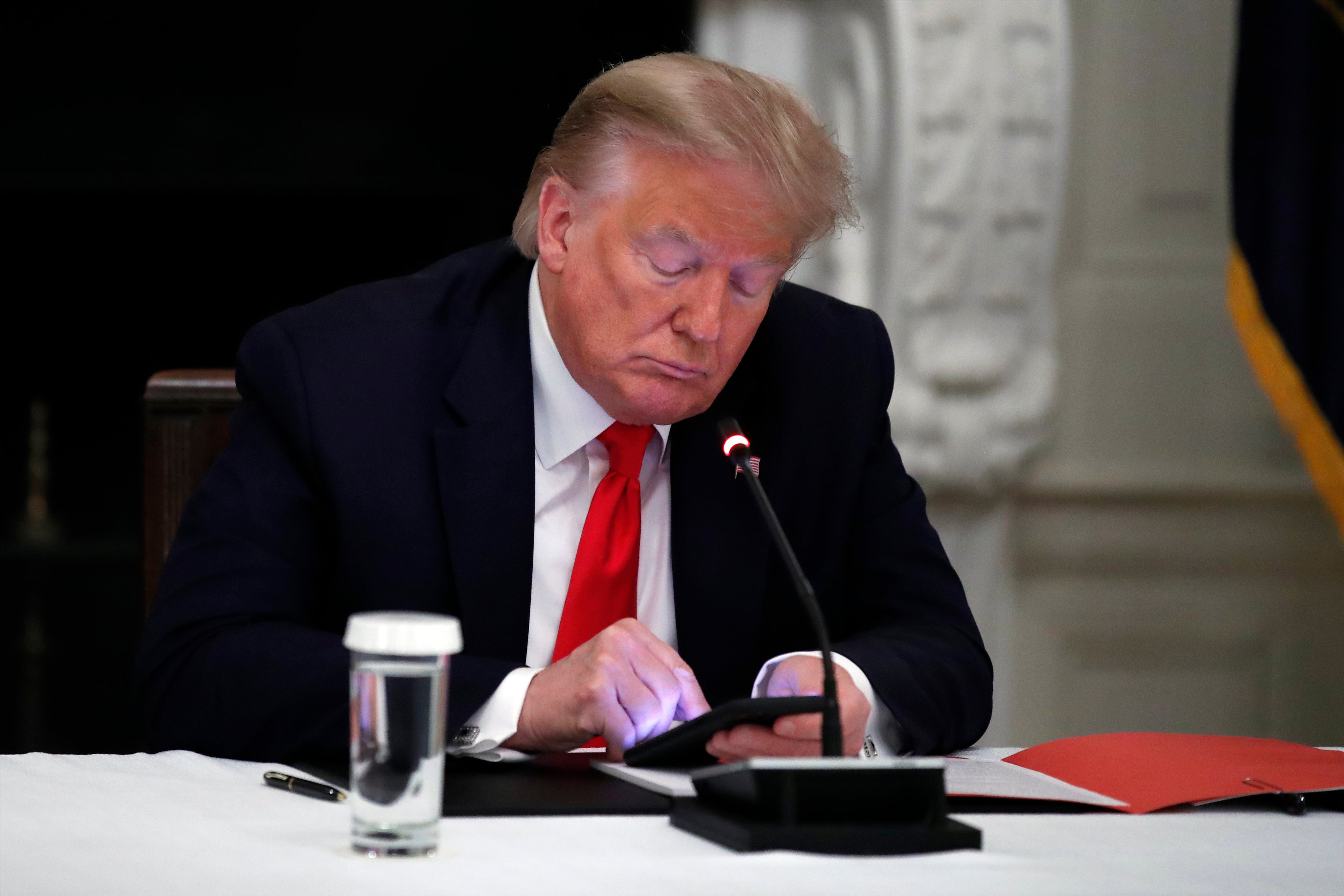 Pelosi urges Pence to remove Trump or Democrats will impeach him

US first lady Melania Trump has praised the “passion” of Trump supporters in a statement in which she also criticised the violence at the Capitol Building last week. “I am disappointed and disheartened with what happened last week,” Mrs Trump said, before adding she was inspired “to see that so many have found a passion and enthusiasm in participating in an election”.

Her comments came amid an escalating effort in Congress to remove Donald Trump from office, following his incendiary remarks at a rally shortly before his supporters stormed the Capitol in Washington, DC.

Meanwhile Parler, a social media platform popular with Trump supporters, has since been removed from the internet by Amazon, which had provided the online tools needed to run the app. Amazon had told Parler that it had seen “a steady increase in this violent content on your website, all of which violates our terms”.

The New York State Bar has launched an inquiry into whether to withdraw membership from Rudy Giuliani, Donald Trump’s personal lawyer, over his role in the pro-Trump riot that rocked the US Capitol last week.

The blame for the insurrection, the association said, “lies first and foremost with President Donald Trump”, but it added Mr Giuliani had also “addressed a crowd of thousands at the White House, reiterating baseless claims of widespread election fraud”.

Mr Giuliani, the association noted, had said at the rally: “If we’re wrong, we will me made fools of, but if we’re right a lot of them will go to jail. Let’s have trial by combat.”

What followed was a violent riot that left at least five people dead and many members of Congress fearing for their lives.

A Trump supporter who became known as the ‘QAnon shaman’ after being pictured during riots at the US Capitol is reportedly a “failed actor” and conspiracy theorist described by his mother’s neighbours as “bizarre”.

Jacob Angeli Chansley, 33, was charged with entering a restricted building or grounds without lawful authority, and with violent entry and disorderly conduct on Capitol grounds after he participated in the mob that laid siege to the Capitol on Wednesday.

He was photographed wearing horns and carrying a spear while rioting in the Senate debating chamber and had painted his face with red, white and blue face paint.

Democratic representative Eric Swalwell has shared on Twitter the resolution to be brought before the House, which calls on Donald Trump’s impeachment for “wilfully inciting violence against the Government of the United States”.

The president “wilfully made statements that encouraged – and foreseeably resulted in – imminent lawless action at the Capitol, injured law enforcement personnel, menaced Members of Congress and the Vice President, interfered with the Join Session’s solemn constitutional duty to certify the election results, and engaged in violent, deadly, destructive and seditious acts”, it reads.

The Trump review: Part 12 – Disorder at the border and a blunderous European tour

While the fallout from the Mueller report dominated the national news agenda, Donald Trump was laughed at for referring to Apple CEO Tim Cook as “Tim Apple” during a tech summit but otherwise busied himself by returning to the idea of a “crisis” in illegal immigration threatening to overwhelm the southern border, writes Joe Sommerlad in his epic 20-part review of the Trump presidency.

Not content with raking in the funds for his wall over Democratic objections, the president threatened to close the border entirely on 4 April 2019 if Mexico did not act to stop the flow of illegal narcotics northwards, visiting the under-construction barrier in Calexico, California, a day later to inspect progress.

He was accompanied on that trip by his homeland security secretary Kirstjen Nielsen, who had been in the job since December 2017 and found herself the reluctant face of the administration’s heartless policies, not least the separation of families.

One of golf’s two governing bodies has said none of its championships will be held at Donald Trump’s Turnberry golf course in Scotland “in the foreseeable future”.

“We will not return until we are convinced that the focus will be on the championship, the players and the course itself and we do not believe that is achievable in the current circumstances.”

It comes as Mr Trump has found himself increasingly disgraced following a riot by his supporters in the US Capitol, which was widely blamed on the US president’s inflammatory and false rhetoric surrounding the 2020 election that he lost.

The PGA of America earlier said it was stripping Trump National, another of the president’s golf courses, of its rights to hold the 2022 PGA Champsionship.

According to the New York Times’ Maggie Haberman, those words were in reaction to an op-ed by her former aide, Stephanie Winston Walkoff, who said Ms Trump had “blood on her hands” following the violence in Washington DC.

“It was an assault on human life and our great democracy. Unfortunately, our president and first lady have little, if any, regard for either,” wrote Ms Wolkoff, adding she confessed she was a “Melania enabler” who regretted ever working for her.

You can see more on Ms Walkoff’s scathing criticism of Ms Trump here:

Ruth Ben-Ghiat, a historian who has written an acclaimed book on authoritarian strongmen, has said Donald Trump, like many strongmen, has given “validation to the worst criminal elements in society”.

“Trump did this with the GOP – is they glamourise and legitimise lawlessness, so lawmakers become lawbreakers,” Ms Ben-Ghiat told Democracy Now.

“The threat to democracy is not outside our institutions only, it’s coming from inside,” she added.

The president’s tough talking but short-lived press director, who spent 11 days in the hot seat in summer 2017 before becoming a fierce media opponent of his former employer, is warning that the MAGA mob is just getting started.

Gino Spocchia has this report.

Twitter permanently suspended Mr Trump from the microblogging platform on Friday, citing a “risk of further incitement of violence” in the wake of the storming of the US Capitol by supporters of the outgoing president.

Asked about Twitter’s decision, Ms Merkel’s spokesman, Steffen Seibert, said the operators of social media platforms “bear great responsibility for political communication not being poisoned by hatred, by lies and by incitement to violence”.

He said it’s right not to “stand back” when such content is posted, for example by flagging it.

But Mr Seibert also said that the freedom of opinion is a fundamental right of “elementary significance”.

“This fundamental right can be intervened in, but according to the law and within the framework defined by legislators — not according to a decision by the management of social media platforms,” he told reporters in Berlin.

“Seen from this angle, the chancellor considers it problematic that the accounts of the US president have now been permanently blocked.”

Melania Trump has condemned last week’s attack on the Capitol by the US president’s supporters, in what were her first remarks since the assault which left five people dead.

The first lady, who was accused of remaining silent on the riots by a former adviser, said on Monday that “salacious gossip” about her was “shameful”, and that she had “implore[d]” for the chaos to end.

“I am disappointed and disheartened with what happened last week,” said Ms Trump in a statement, in which she admitted that her time at the White House was soon coming to  an end.

0 0 0 0
Previous : Covid: Plan to vaccinate 2m people a week may not be achieved until end of January, ministers admit
Next : CRISPR gene editing used to store data in DNA inside living cells