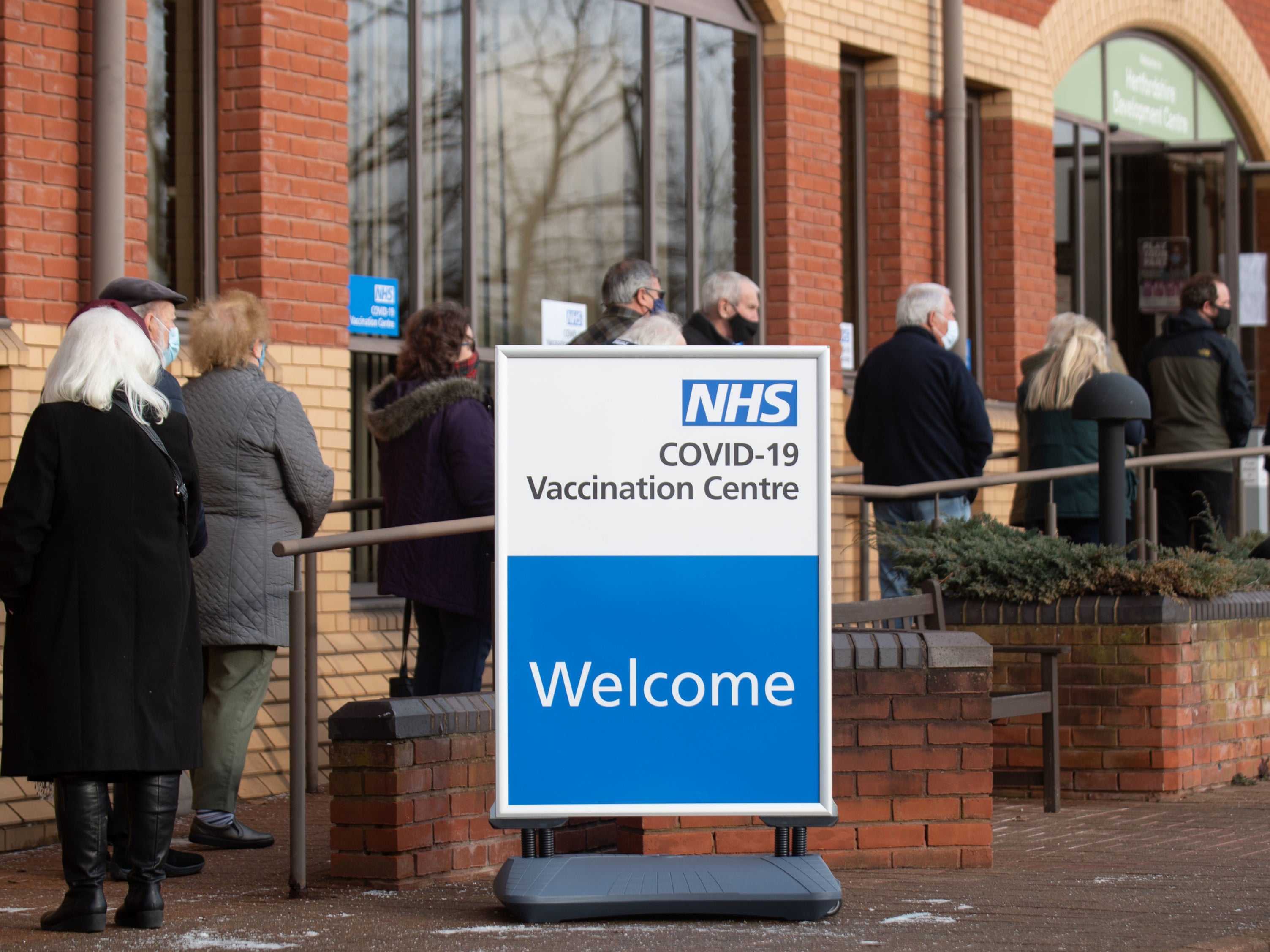 Matt Hancock has dismissed press reports he was considering getting rid of support bubbles and backed supermarkets to ban shoppers who do not wear a face covering.

It comes as ministers are said to be discussing tighter lockdown rules to stop people meeting outdoors and to make mask-wearing in shops a legal requirement.

The current lockdown restrictions in England could be brought closer to those applied during the first national shutdown in March, according to reports.

The proposals for tougher measures include removing the exception that allows two people from different households to exercise together outdoors, while mask-wearing could be enforced more widely, including in offices and queues.

During Monday’s visit to a vaccine centre at Ashton Gate stadium in Bristol, Boris Johnson told reporters that about two million people had so far been vaccinated with around 2.4 million jabs across the UK.

His comments came as seven mass vaccination sites, capable of delivering thousands of Covid-19 jabs each week, opened across England.

England’s chief medical officer has warned the coming weeks are going “to be the worst weeks” of the coronavirus pandemic for the NHS.

Professor Chris Whitty said that while 18,000 people were in hospital with Covid-19 during the April peak last year, on Sunday there were more than 30,000 beds occupied by patients with the disease.

He said the pandemic was now “everybody’s problem” as he urged people to “double down” and stop any “unnecessary contacts”.

That’s all for our live coverage of the coronavirus pandemic for today. Thanks for reading.

Supermarkets should ban shoppers who refuse to wear face coverings, Matt Hancock says, as the Covid crisis continues to worsen.

Pre-departure Covid-19 testing for all inbound travellers to England will be mandatory from 4am on Friday, the Department for Transport has said.

Passengers arriving by ship, plane or train will have to provide evidence of a negative test up to three days before departure to the transport operator.

New arrivals will still have to quarantine for 10 days regardless of their test results, transport minister Robert Courts said.

British nationals attempting to return home who test positive must not travel, and must follow the local guidance in their host country.

Those travelling without a pre-departure negative test result will be fined a minimum of £500, while operators transporting non-compliant passengers will also be fined.

A police force has urged the public to reconsider making weekend trips after two “ill-equipped” walkers had to be rescued from a mountain.

The couple travelled from Rochdale in Greater Manchester to try and climb the summit of Ingleborough, the second highest peak in the Yorkshire Dales.

North Yorkshire Police said the man and woman were “incredibly fortunate” not to have been injured after they got into difficulty in poor weather on Sunday.

Officers also had to turn away numerous out-of-area visitors who had come “for a drive” or “to look at the snow”, were called to several house parties and handed out dozens of fixed penalty notices.

Superintendent Mike Walker said: “We very clearly advised members of the public this weekend to stay at home and when taking exercise, stay local to stop the spread of Covid.

“Quite simply driving miles and miles, out of your village, town or city to visit an open space is not a necessary journey and is not acceptable.

“Neither is arriving at a challenging walking location, inexperienced and unprepared in treacherous weather conditions.

“By making an irresponsible and ill-informed decision, the safety of others, such as the Cave Rescue Organisation volunteers, is also put in jeopardy and if any injury resulted, pressure upon already stretched NHS resources.”

Matt Hancock has ruled out removing the support bubbles relied on by many thousands of Britons during lockdown.

Fears that the bubbles might be outlawed was fuelled on Monday when Boris Johnson’s official spokesperson said that they were among lockdown measures which were being kept under “constant review”.

After Boris Johnson warned earlier today that tougher lockdown measures may be needed, the Daily Mail claims that scientists are urging the prime minister to extend social distancing from two metres to three metres. But would it make any difference?

Marcus Rashford has hit out at “unacceptable” parcels of free school meals sent out to children during lockdown.

The footballer retweeted a photo of one bag of food which a mother said was sent to her instead of £30 vouchers and commented: “Children deserve better than this”.

The Department of Education said it was looking into the issue, adding: “We have clear guidelines and standards for food parcels, which we expect to be followed. Parcels should be nutritious and contain a varied range of food.”

His office said the 72-year-old has so far shown no symptoms. The presidential election is due to take place on 24 January.

A troop of gorillas at the San Diego Zoo has become the first in the world to test positive for the coronavirus.

The park’s executive director, Lisa Peterson, said: “Aside from some congestion and coughing, the gorillas are doing well.”

Don’t leave home just to sit on a bench, says No10

Sitting on a park bench for a “short pause” during exercise is reasonable, but leaving the home just to sit in public is unlawful under coronavirus rules, Downing Street has said.

No10 was criticised earlier today after the prime minister’s official spokesman was unable to confirm if a single person could sit down on a bench under the restrictions.

But a government source has now clarified that while a “short pause during the course of exercise would be reasonable”, it would be “unlawful to leave the house just to sit in public”.