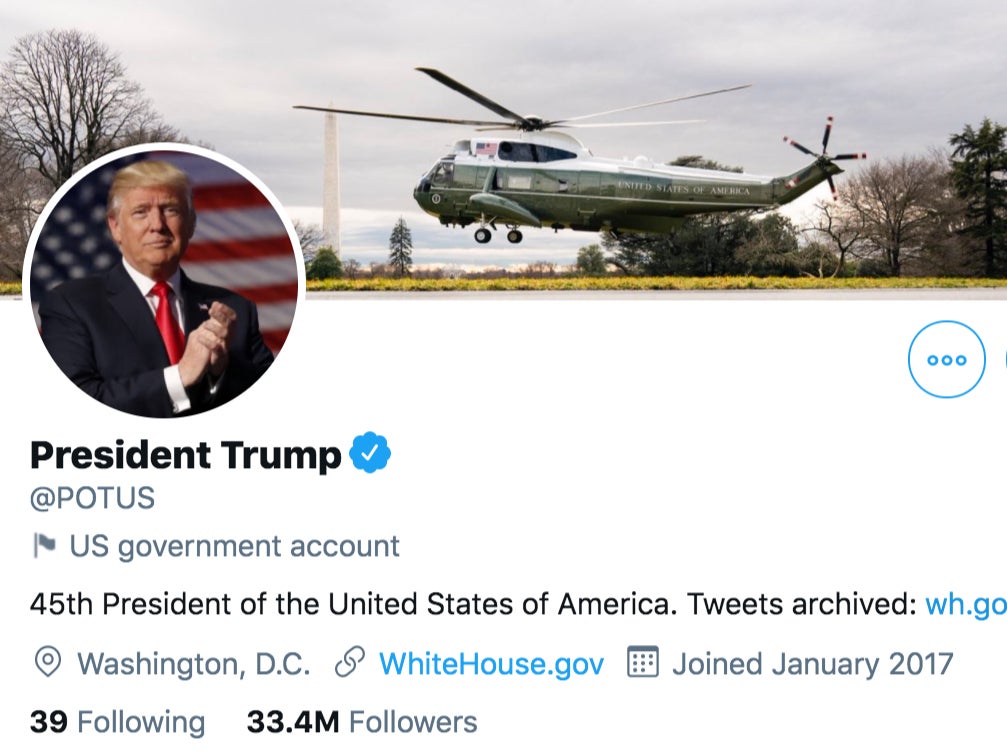 Twitter has permanently suspended Donald Trump due to the “risk of further incitement of violence” in the final days of his presidency – but what will happen to his other official account?

The official @POTUS account was first created in 2015 during Barack Obama’s presidency and was handed over to Mr Trump when he entered the White House.

But following his suspension from the platform on Friday, the 45th president used the account – typically far more reserved and statesman-like in its output than his former personal profile – to unleash a flurry of angry tweets denouncing the platform from which he so often chose to assert the power of his office.

In a likely reference to Twitter’s recent steps to police his more corrosive and misleading tweets – particularly his baseless assertions that voter fraud was to blame for his electoral defeat – Mr Trump claimed the social media giant had “gone further and further in banning free speech”.

He insisted that his suspension was the result of Twitter employees having “coordinated with the Democrats and the Radical Left” in a bid to “silence” him, and the 74 million “great patriots” who voted for him over president-elect Joe Biden.

Those tweets, reported by The Verge, appear to have been swiftly deleted by Twitter, with a representative confirming to BuzzFeed that enforcement action had been taken to counter Mr Trump’s attempt to evade his suspension.

A Twitter spokesperson told The Independent on Saturday that it could yet suspend the official US government account, but only if “absolutely necessary to alleviate real-world harm”.

“As stated in our ban evasion policy, if it is clear that another account is being used for the purposes of evading a ban, it is also subject to suspension,” they said.

“For government accounts, such as @POTUS and @WhiteHouse, we will not suspend those accounts but will take action to limit their use. However, these accounts will be transitioned over to the new administration in due course and will not be suspended by Twitter unless absolutely necessary to alleviate real-world harm.”

Despite the attempts of Mr Trump to frustrate the democratic transition of power, leading to what has been widely viewed as a failed insurrection attempt by his supporters at the US Capitol, the spokesperson said the changeover of Twitter accounts to the Biden administration “will occur as planned”.

“As we did in 2017, Twitter is actively working with the US government to support the transition of Twitter accounts across administrations, so that the incoming Biden administration will have access to institutional White House Twitter accounts, including @WhiteHouse, @POTUS, @VP, @FLOTUS, @PressSec, @Cabinet, and @LaCasaBlanca,” the spokesperson said.

They also re-confirmed their December statement revealing that the Biden administration would have to build its following on these official accounts from scratch after the handover, despite Mr Trump having automatically retained their Obama-era followers in 2017.

Meanwhile, in his series of now-deleted tweets on the official POTUS account, Mr Trump claimed that his team has “been negotiating with various other sites, and will have a big announcement soon”.

The outgoing president added that the Trump family “will also look at the possibilities of building out our own platform in the near future”.

0 0 0 0
Previous : Council to ‘revisit’ removal of cycle lane on Kensington High Street
Next : ‘Sacrificed for a bunch of fish’: How the City of London got turned over by Brexit in week one