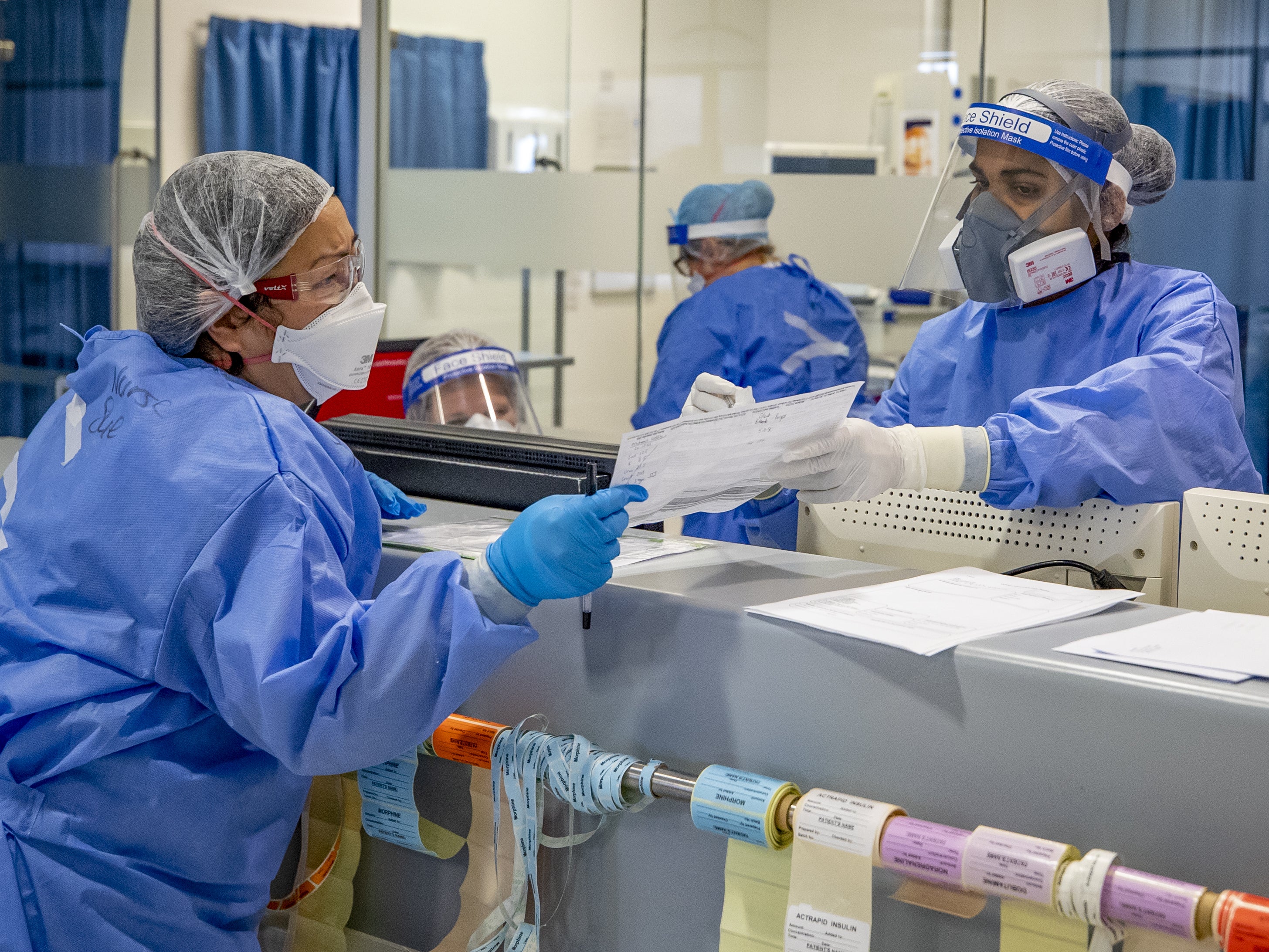 Across England, the virus accounts for almost half of staff absences – 46,378 out of a total of 95,452 – with the figure as high as 58 per cent in London and the southeast, whose hospitals are under the most strain

Hospital leaders have warned the shortages mean patients may have to wait longer for care and will put more strain on existing staff who are already seeing the numbers of patients in their care stretched to unsafe levels.

The British Medical Association has called for all health and care staff to be vaccinated by the end of the month to protect workers and prevent the NHS being overwhelmed.

It comes as leaders in Greater Manchester warned the area’s hospitals face “a very high risk” of having to cancel some cancer operations, with council leader Sir Richard Leese saying: “I now do believe that we are at serious risk of the system falling over. I cannot understate the amount of pressure the system is now under.”

Elsewhere, patients in Cumbria have been transferred to hospitals in Scotland and Newcastle after Carlisle’s Cumberland Infirmary admitted it was “unable to deliver comprehensive care”.

Across England on Wednesday, there were 27,727 patients with coronavirus in NHS hospitals, with 62,322 people testing positive for the virus.

For the first time since April the UK’s daily deaths reached four figures, with 1,041 deaths reported on Wednesday.

The staffing crisis is so bad that NHS bosses have pleaded with doctors and nurses to work extra shifts. At the Royal London Hospital surgeons have volunteered to do basic patient care tasks to help intensive care nurses look after patients.

NHS Providers chief executive Chris Hopson told The Independent: “At a time when the NHS is under extraordinary pressure due to surging infection rates caused by the new variant and longstanding workforce shortages, these absences add significantly to the challenges trusts are facing. This can, despite the best efforts of frontline staff, translate into longer waits for care and significant pressure on those staff that are working.”

He said hospital bosses were hopeful approval of the Oxford/AstraZeneca vaccine would mean more staff would be vaccinated in coming weeks.

He added: “This will be crucial to help reduce staff absence and the risks arising from exposure of frontline staff to the virus. This is only a short-term stopgap, though. When we get past this immediate period of unprecedented pressure, the NHS is going to need a fully funded, agreed workforce plan that gives the NHS the increases in long-term workforce numbers it desperately needs.”

According to the latest NHS England data, shared among hospital chiefs on Wednesday, there are 33,285 nurses absent from work, 16,805 of whom are linked to Covid-19.

While London and the southeast have 58 per cent of absences linked to the virus, no region in England is below 40 per cent.

Dr Chaand Nagpaul, chair of the British Medical Association, said: “Hospitals are becoming like warzones, and healthcare workers are the exhausted foot soldiers on the front line. GPs are similarly pushed to the limit delivering an unprecedented mass vaccination programme in the community seven days a week.

“All of these workers are at constant risk of becoming infected, yet they are, beyond all doubt, the most important cog in the Covid-19 ‘care machine’.

“Vaccinating health and care workers won’t stop them being exhausted, and won’t stop them feeling the stress and anxiety of not having enough time, or beds, to give patients the care they need. But it will give them protection from this deadly virus and drive down on rates of sickness absence and necessary isolating, which are leaving services brutally exposed.”

An NHS England spokesperson said: “In line with government guidance, NHS staff are required to isolate following community contact with a confirmed Covid case and it is a priority to keep staff safe and well, physically and mentally – with a number of support offers, including a health and wellbeing support package that has now been accessed over 600,000 times.

“The NHS is also rapidly accelerating rollout of the Covid vaccine, which will allow staff to continue to care for patients.”

0 0 0 0
Previous : ‘This isn’t my fault’: University students on facing rent while lockdown keeps them away from accommodation
Next : Brexit news live: Latest updates as trade deal branded ‘very unstable’