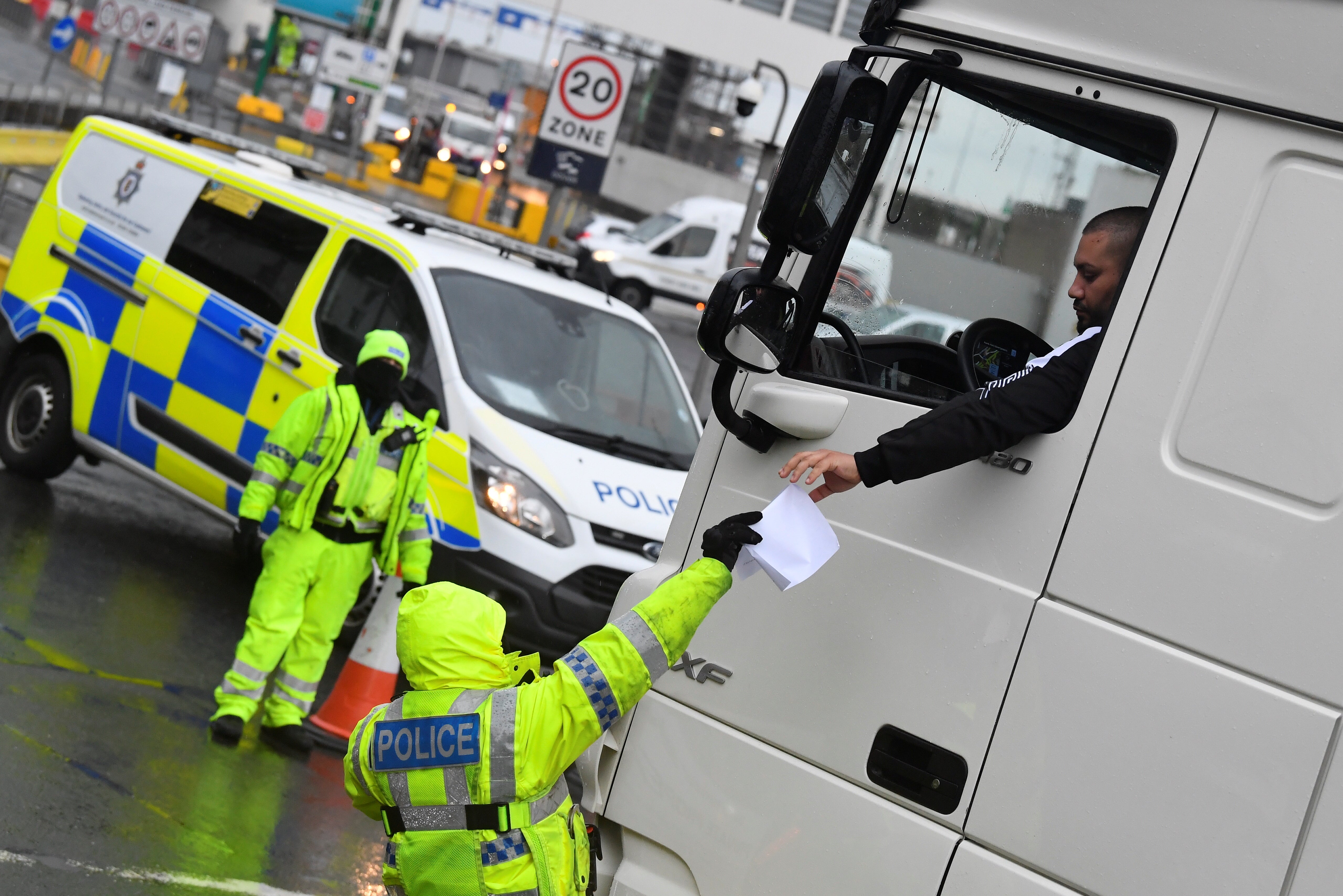 The Brexit trade deal is “very unstable” and could easily be brought crashing down, a legal expert has warned MPs as importers run into difficulty transporting goods across the Irish sea under new customs checks.

Several questions on tariffs and trade go unanswered in the deal, specialist EU legal scholar Professor Catherine Barnard said, warning that companies may be put off investing in the UK.

Prof Barnard’s warning comes as a customs official with 40 years of experience in the field complained that the post-Brexit Irish sea border is “cumbersome” and hugely complex.

Warning of a “huge shortage” of customs agents, Robert Hardy, director of one of four companies tasked with handling new customs forms for goods moving between Great Britain and Northern Ireland, said pressure will build at the border as exports begin to ramp up.

A small grocer in Northern Ireland has already been forced to close after discovering new customs rules meant he could have to pay double the price for each item imported from Great Britain.

Jonathan Owens, who runs grocer Causeway Organic, said he suspended trading after learning of “an extra layer of red tape” in imports despite Northern Ireland secretary Brandon Lewis’s insistence “there is no Irish Sea border”.

Meanwhile, UK nationals have been blocked from entering Sweden after Ryanair staff reportedly refused to accept a negative coronavirus test from the NHS. Travellers had already faced trouble attempting to reach Spain and the Netherlands after the end of the Brexit transition period on 31 December.

Scotland’s rural economy secretary Fergus Ewing has said the Scottish government is working hard to resolve fish and seafood customs delays which are affecting the country’s current exports and imports.

Mr Ewing said he had joined forced with logistics companies to provide an “EHC (Export Health Certificate) service at a number of central Scotland logistics hubs, thereby reducing the burden on local authorities”.

It comes after Scottish seafood industry figureheads warned that customs arrangements in the wake of Brexit are causing delays as “entire trailers” need to be checked rather than samples –  as before.

The Scottish Seafood Association said exports to the EU are already being hit by unnecessary delays. The industry body also said the problem is likely to get worse in the coming days as the pace of trade increases.

“We are all learning – including businesses – how to manage the considerable burden of this new bureaucracy on exporting food products,” Mr Ewing said.

“We know how frustrating, time consuming and indeed costly this is for Scottish businesses – we warned the UK government that we needed much more clarity much sooner than we got on what the export process would involve after the transition period ended and that its plans to leave the single market would create barriers like this.”

He said the FSS (Food Standards Scotland) has the necessary “veterinary capacity at the hubs” and that Scotland would “continue to work closely with businesses and organisations to ensure that we are all doing everything possible to minimise delays and expedite product journeys”.

“That includes applying an appropriate level of scrutiny to ensure that businesses are accurately completing all necessary paperwork,” he said.

Mr Ewing also warned it was “far better” for problems to be identified and resolved “here in Scotland” as opposed to consignments being turned back “hundreds of miles away or refused when they arrive at the end of their journey”.

In some Covid-related news, MPs have this evening backed new lockdown legislation by a huge 524-16 majority.

It comes as official figures showed a daily death toll from the disease of more than 1,000 for the first time since mass testing was introduced.

My colleagues Kate Devlin and Andrew Woodcock report as anti-lockdown Tory backbenchers rage that new rules give ministers the power to keep the strict new controls in place until 31 March:

Johnson heads up call with business leaders and ministers

A Number 10 spokesman said the PM “opened the call by recognising 2020 has been a tough year for businesses across the country” and thanked those present for their “huge efforts [in] helping to keep the country moving and looking ahead to the rollout of the vaccine as a source of hope this year”.

Turning to the Brexit deal recently reached, the spokesman said Mr Johnson assured businesses on the call he was “committed to working with British businesses to realise the vast opportunities on offer as the UK forges an independent future and welcomed that firms can now look with certainty at the year ahead”.

“He set out the government’s urgent ambition to unite and level up across the country by investing in education, skills, technology and infrastructure,” the spokesman said. “Referencing the rollout of gigabit broadband and the substantial investment in green technology announced in December, the Prime Minister also outlined his vision for building back better from the pandemic.”

He added that Rishi Sunak had spoken about his optimism for the UK economy in 2021 and “committed to using all the levers at his disposal to drive growth across the entire UK which meets our climate ambitions”.

Boris Johnson has been accused of taking a step backwards in the fight against climate change after it emerged the government will not block a new coal mine being built in Cumbria.

It was revealed on Wednesday that ministers would not ‘call in’ the planning application for the site near Whitehaven, after the PM previously launched plans to start a green industrial revolution in the UK – though these too were panned by campaigners.

He said on Wednesday: “This is great news and the perfect time in the New Year. The need for Reform is greater than ever as we try to recover from Covid.

“We have a huge opportunity as a nation post-Brexit, but there are many areas of the UK that need real, bold reform: our economy, House of Lords, BBC, civil service, the voting system to mention a few.”

Meanwhile Richard Tice, chairman of the party, said: “The name change reflects what our country needs: Reform. Real change to benefit the people, to make our nation more successful.

“We must reform our approach to Covid, and reform the economy so that it incentivises the self-employed, entrepreneurs, and small businesses.

“Faster growth for all will be achieved by reforming our approach to tax, unnecessary regulation and wasteful government spending.”

The name change had been challenged by the Reform think tank, which argued that it could lead to “voter confusion”, but was approved by the Electoral Commission today.

The Brexit Party, as it was known before, took 2 per cent of the vote in the 2019 general election but did not succeed in electing an MP.

In the eye of the third lockdown, ministers are refusing to restart a programme that saw homeless people given accommodation in spring last year – meaning thousands of displaced people have fallen off the radar.

The Ministry of Housing, Communities and Local Government (MHCLG) admits that one-third of the 29,000 rough sleepers who were housed under the scheme in the first wave have still not been moved into “settled accommodation” – defined by the government as a tenancy of at least six months either in the private sector or with a housing association or council.

Our social affairs correspondent, May Bulman, has this exclusive story:

Farage gets go ahead to rename Brexit Party as Reform UK

The Telegraph’s Christopher Hope is reporting the following:

Boris Johnson has been accused of “demoralising” nurses, and challenged over pay rise claims, after comments he made today in the House of Commons.

The PM said that public sector workers had been given above inflation pay increases which, according to him, amounted to 12.8 per cent for nurses.

But Royal College of Nursing (RCN) general secretary Dame Donna Kinnair said this was not the case, and that nursing staff were actually worse off now than in 2010 following years of wage freezes and below inflation awards.

Dame Donna wrote to Mr Johnsog urging him to be “accurate” when discussing nurses’ pay, saying:

“I am writing to inform you that this is not a statement which nursing staff will recognise.

Nursing staff are worse off now than they were in 2010, following years of freezes and awards that were capped below the level of inflation.

On their behalf, I urge you and fellow ministers to be accurate when discussing their pay. To our members working a brutal shift today this kind of message from you is demoralising.

As committed professionals, we are facing the new variant and rising levels of pressure with determination but are fast approaching burn-out.

You have a historic opportunity to show you truly value our work, skill and dedication. Our members want proper recognition and fair pay – not more clapping.”

She added that as the leader of a professional body and trade union representing 450,000 nursing staff across the United Kingdom, she would appreciate the chance to put the case to Mr Johnson directly.

The Bank of England’s governor has said it is “problematic” that the EU wants information on what regulations the UK wants to change in the future.

Andrew Bailey was speaking of the demand for so-called “equivalence” which ensures UK and EU rules are in line. Without it, the EU could block UK based companies from selling services in Europe.

“I’m a strong supporter of open markets. I fail to see why people would want to close themselves off from open markets,” Mr Bailey told MPs on the Treasury Select Committee.

“But the situation we find ourselves in is that the EU wants more information from the UK on what its future intentions are on regulation. I think that’s quite problematic frankly in terms of equivalence.”

The EU has said that it only wants to allow euro-denominated derivatives trading, which includes buying and selling currency and bonds, to take place within the bloc or somewhere else with equivalent rules.

Negotiators are now pushing to sign a memorandum of understanding about financial services, which forms a major part of the UK economy but was not included in last month’s deal, by March.

A leading Tory credited with inspiring Brexit has urged Boris Johnson to cull some EU consumer and worker protections now that the UK has officially left Europe.

Safeguards for the use of data, pay and conditions, GM foods, hedge funds, dangerous chemicals and the disposal of environmentally-damaging vehicles should all be binned, according to former MEP Daniel Hannan.

0 0 0 0
Previous : Hospitals left short-staffed with half of all sickness absence linked to Covid
Next : GCSE and A-level exams cancelled and replaced by teacher-assessed grades