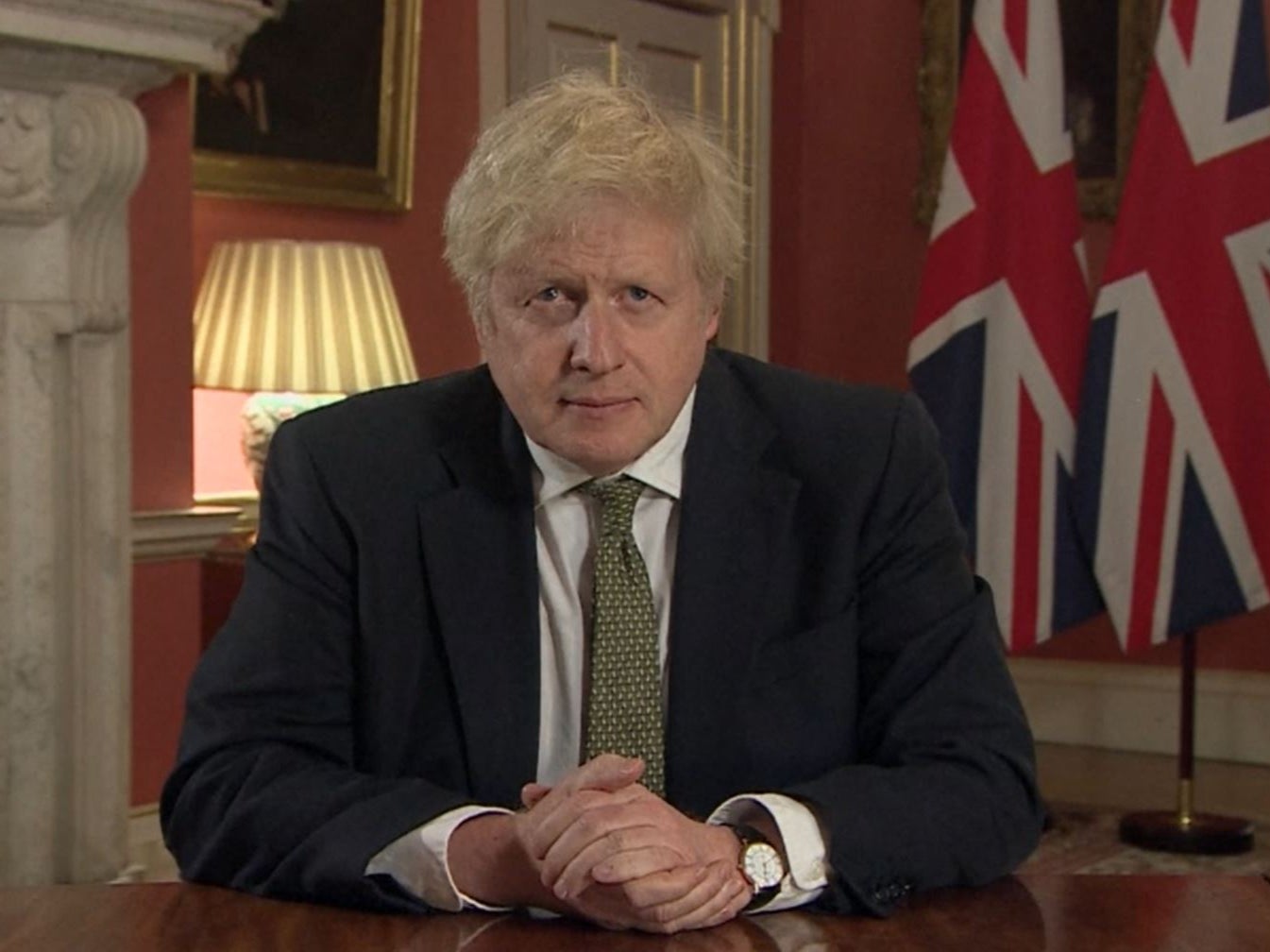 England has entered its third national lockdown after Boris Johnson shut schools and imposed the toughest restrictions in March in an attempt to stem surging coronavirus infections.

In a televised address to the nation yesterday evening, the prime minister ordered the country to stay indoors other than for limited exceptions and bowed to controversy to order primary schools, secondaries and colleges to remove to remote learning for the majority of students.

The new lockdown will continue until March and some restrictions will stay in place even longer, Michael Gove said on Tuesday.

Mr Johnson’s decision came after Nicola Sturgeon imposed a lockdown on Scotland for the rest of January, which has a legal requirement for people to stay at home and closed schools to most pupils until February.

Schools and colleges in Wales will also remain closed until at least 18 January and move to online learning, while in Northern Ireland – which is already under a six-week lockdown – “stay at home” restrictions will be brought back into law and a period of remote learning for schoolchildren is to be extended.

Michael Gove said the NHS was working “24/7” to ensure 13 million people are vaccinated by the middle of February.

Speaking to BBC Breakfast, he said: “We know that we’ve vaccinated one million people up to the weekend.

“We’re increasing the numbers this week and we’re hoping, as the prime minister outlined, to reach just over 13 million in February.”

Asked about what was being done logistically to ensure the most vulnerable were inoculated by the school half-term, Mr Gove added: “Everything. We do want to make sure these vaccines are delivered in the safest possible way, that we do everything we can not to waste a drop.

“The process of making sure the vaccine can be placed in the appropriate vials and then safely injected into people’s arms is a complicated exercise but the NHS has more than risen to the challenge.

“We have some of the best public servants in the world working in our NHS and they are working 24/7 in order to ensure that we can inject people, whether that is in hospitals or through GPs or in other ways.

“We’re seeking to reach as many people as possible as quickly as possible.”

The government needed to treat pupils without laptops and access to sufficient technology as a priority, Anne Longfield, the children’s commissioner for England, said

She told BBC Radio 4’s Today programme: “There is no doubt that remote learning and a large amount of time out of school has a very negative impact on children.

“Remote learning now needs to be a high priority for the government and we need a plan around that to ensure there is consistency in what schools are able to offer but also that tech issue.

“A lot of pupils still don’t have laptops. They are surviving on broken phones – those children now need to be seen as a priority to get into the classroom and deemed to be a vulnerable child.

“There is also the issue of the cost of data, and I think this is something that tech companies and broadband companies really need to step up to now.”

On exams, she said: “We’re looking at moving to teacher-assessed grades again, even if they are alongside some form of exams, but really having the moderation that wasn’t there last year to give confidence.”

Nine months after the aviation industry started calling for testing to reduce the spread of coronavirus, the UK government is set to make a negative Covid result compulsory for some travellers to the UK, travel correspondent Simon Calder reports.

Chancellor Rishi Sunak has announced a grant worth up to £9,000 for retail, hospitality and leisure businesses hit by the new lockdown.

The one-off payment is expected to benefit more than 600,000 business properties across the whole UK, at a total cost of £4bn, the Treasury said.

End-of-year exams could be cancelled in favour of alternative styles of assessment, Gove says

Michael Gove suggested that end-of-year exams for pupils will be abolished in favour of alternative styles of assessment following the new lockdown.

He added: “My own daughter is due to sit A-levels this year, my son due to sit GCSEs – I know how hard students across the country between Years 11 and 13 have been working.

“We will be putting in place alternative arrangements in order to make sure that the hard work that students have put in to acquire knowledge and develop their skills is appropriately assessed, recognised and awarded.”

Mr Gove said the full details are being worked out between Ofqual and the education secretary, Gavin Williamson.

He added: “One of the things about assessment is that it necessarily involves those students doing particular tasks which teachers will assess. Whether or not they are moderated in a particular fashion by particular awarding bodies or others is a delicate process.”

Professor Neil Mortensen, president of the Royal College of Surgeons, raised concerns about the prospect of cancer surgeries being cancelled.

He told Times Radio: “Over the weekend we talked about a slow-motion car crash, but I think it’s getting much worse than that now.

“My colleagues in London doing ward rounds, for example, report that there are problems with staff numbers on the wards, staff numbers in theatres.

“So it’s a really serious situation and, obviously, the less-priority operations have already stopped in many places – hips, knees, ENT (ear nose and throat) procedures.

“We’re now concerned about operations like cancer surgeries being cancelled or postponed because there just isn’t the capacity to be able to manage them.”

He added: “I think if you have a delayed operation for cancer that may have an effect.

“And that’s why everybody is so concerned right now that we are properly locked down, that we’re as far as we possibly can reducing the transmission of the virus, and making it possible for what facilities we do have to carry on working effectively to keep people alive.”

Alcohol takeaways to be banned in England until mid-February

All restaurants, pubs and other hospitality settings must close their doors to customers from tomorrow under the new rules announced by the prime minister in a televised statement from 10 Downing Street, political editor Andrew Woodcock reports.

Labour leader Sir Keir Starmer said he will back the new national lockdown in England.

When asked on BBC Breakfast if the new restrictions were what he had in mind when he called for another lockdown, Sir Keir said: “Yes, it is what we had in mind and we will back it.

“It was inevitable we needed a national set of restrictions. That’s why I called for it.”

He said that it was now a race against time to ramp up the national vaccination programme.

“We are in a race against time now. We have got a contract with the British people to say these are tough restrictions, in return for that the government has got to roll out the vaccination programme at speed and accelerate that.

“This is a huge challenge and I think we need to pull together.”

Liberal Democrat leader Sir Ed Davey has said Boris Johnson had developed a costly habit of being late to respond to expert advice on the need for a national lockdown.

He told BBC Breakfast: “I’m afraid this prime minister has a record now: he is always late on these lockdowns.

“He always seems to put off the difficult decisions to the last minute and that means people end up paying the price, either with disruption to their lives or, in some cases, with their lives themselves.

“I’m afraid that, yes we will support these measures, but we just wish the prime minister was rather more competent.”

New lockdown to last until March and some restrictions for even longer, Michael Gove says

England’s new lockdown will continue until March and some restrictions will stay in place even longer, Michael Gove has said.