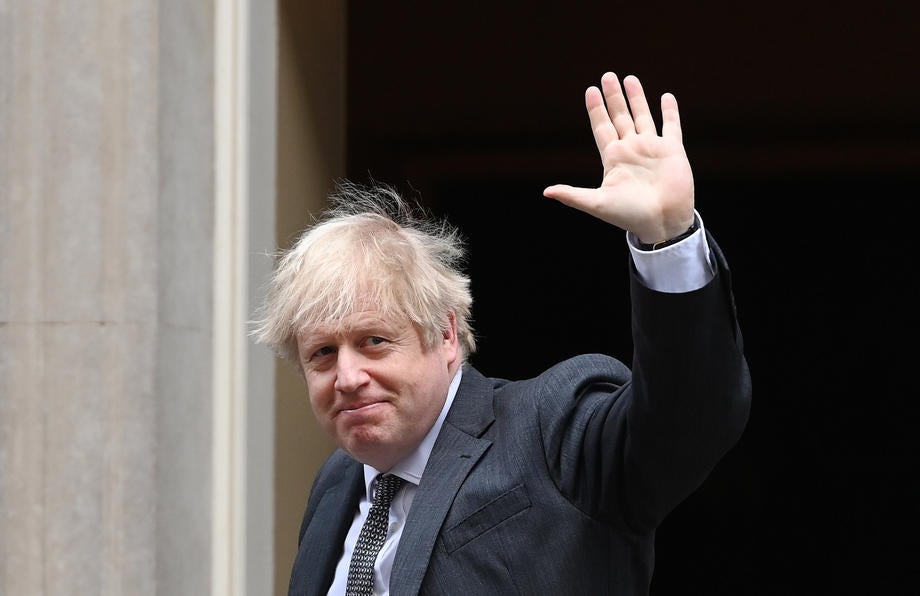 Regretful Brexiteer says ‘be careful what you wish for’

A growing number of online retailers in the EU have decided they won’t deliver to Britain because of the new costs involved in sending packages after Brexit. European firms have said they are unwilling to register for VAT in the UK.

It comes as problems emerged with the first lorries to cross from Great Britain into Northern Ireland. Some food shipments did not have the correct paperwork, with waits of 10 hours at new border posts. Disruption means Sainsbury’s has reportedly lost around 700 product lines in NI – and the giant has been forced to stock goods from Spar.

Meanwhile, Nobel laureate has warned Boris Johnson’s government it “cannot duck” the UK’s inequality problems after the pandemic. Sir Angus Deaton’s review for the Institute for Fiscal Studies said the wealthiest had been “much better able to ride out the crisis”.

Marks & Spencer said new trade rules in place since Britain left the EU were delaying deliveries of some fresh food to its stores in France – where at least three branches had empty shelves on Tuesday.

The items out of stock at three Paris branches of M&S included sandwiches, black rice and edamame bean salad, and turkey tortilla with curry, according to labels on the empty shelves.

M&S said: “As we are transitioning to the new processes, it is taking a little longer for some of our products to reach stores – but we are working with our partners, suppliers and relevant government agencies and local authorities to quickly improve this.”

A spokeswoman for Lagardere, the French firm which holds the franchise for some of the stores in France, said it was working with M&S on the supply disruptions and expected the problems to be fixed by the end of January.

What about the Brexit “teething problems” for Britons trying to enter EU countries? Travellers heading for Spain, the Netherlands and Sweden have all been held up at borders since the start of the year – despite claiming to have the correct paperwork.

Police in the Netherlands confirmed that 10 British citizens were refused entry into the country.

Mike Hofman, from the Royal Netherlands Marechaussee force, told the PA news agency: “British citizens are no longer subject to EU rules now that Brexit has started and due to corona they are only allowed to enter the Netherlands if it is strictly necessary.”

And British ambassador to Sweden Judith Gough said she was “very concerned” to hear of UK nationals being refused entry to the Scandinavian nation.

She said: “It is clear that there have been teething problems … we are asking the Swedish authorities to provide greater clarity and consistency for UK nationals, who wish to return home to Sweden.”

‘Brexit deal did not bring closure for EU citizens in UK’

Britain’s completed Brexit process was supposed to bring clarity from the start of January. But our columnist Andrea Carlo says EU citizens in the UK are still living with a lot of uncertainty.

There have been 29,000 recorded refusals to the EU Settlement Scheme, while many more are unclear whether they have settled or pre-settled status.

“Faced with a general lack of transparency from the Home Office, rising numbers of Settlement Scheme refusals, a lack of physical proof of status, and the widespread potential for vulnerable individuals to fall through the cracks, the future offers little hope of reassurance or certainty,” he writes.

Keir Starmer accused Boris Johnson has been “too slow into decisions” during the coronavirus crisis. The Labour leader told Sky News: “Of course there’ll be mistakes, but the critical question is do you learn from that and make sure you don’t make them again.”

The Lib Dems offered similar criticism this morning. Leader Ed Davey told the BBC: “I’m afraid this prime minister has a record now: he is always late on these lockdowns. He was late on the first, he was late on the second, late on the third – and that’s because he ignores the advice of experts.”

The Brexit disruption has forced one of the UK’s largest supermarkets to stock a rival grocer’s products in their Northern Ireland shops.

Several Spar-branded products lines are on sale in Sainsbury’s shops under a “temporary” agreement to avoid empty shelves from 1 January. Fresh foods including ready meals, meat, dairy products and desserts are affected.

A member of staff told the Belfast News Letter that about 700 product lines had been lost due to Brexit. A Sainsbury’s spokesperson said some products were “temporarily unavailable for our customers in Northern Ireland while border arrangements are confirmed”.

Dodds has written to Cabinet Office minister Michael Gove over the issues that have arisen since Brexit took effect – raising concerns that retailers based in Great Britain are cutting their services because of a lack of clear guidance.

The UK government recently announced a grace period for three months. Under it, online retailers in GB will not have to make customs declarations when sending parcels valued below £135 to NI customers until 1 April. However, it is currently unclear what will happen after 1 April.

Dodds called for a plan to ensure that retailers do not withdraw from the Northern Irish market when the grace period ends. “We are now seeing the impact of these changes and even at this early stage there is significant cause for concern from both businesses and consumers,” she said in her letter.

“I am particularly worried about more vulnerable consumers, in terms both of health and income. Delivery of goods is an essential measure at the moment, and lack of delivery places Northern Ireland consumers in a much worse position compared to GB consumers.”

The National Federation of Fishermen’s Organisations (NFFO) is not impressed by Downing Street’s promise of £100m to help expand fleets over the five-and-a-half year transition period.

The industry expressed its outrage at the Brexit trade deal – which sees only 25 per cent of stocks in British waters returned to UK fishermen.

Asked in the funding package would help soften the blow of the trade deal, NFFO chief executive Barrie Deas said: “The short answer is no.”

“The fishing industry would much prefer to have our full quota entitlements which an independent coastal state has the right to expect,” Deas told the i newspaper. “Unlike agriculture, fishing has never been an industry highly dependent on subsidies.”

Gove: Go walking with a friend – but don’t sit down with them

If you’re still catching up with the rules for the latest lockdown, Michael Gove has shed some light on meeting up with others outdoors.

People can go walking with a friend but cannot sit down with them for more than a very short rest, the Cabinet Office minister said.

“One of the things that we do want to stop is the idea of people essentially congregating or socialising outside.” Asked if that meant “don’t sit down together, otherwise it no longer counts as exercise”, Gove agreed those were the new rules.

“Yes. I think, inevitably, it may be the case that for a second someone will want to pause and rest in the course of exercise,” he told the Today programme. “Do stay at home, of course exercise once a day, but also do everything possible to restrict social contact.”

Chancellor Rishi Sunak has announced a grant worth up to £9,000 for retail, hospitality and leisure businesses hit by the new lockdown.

The one-off payment is expected to benefit more than 600,000 business properties across the whole UK, at a total cost of £4bn, the Treasury said.

Sunak also announced a £594m discretionary fund to support other businesses hit by the Covid shutdown announced on Monday by Boris Johnson – expected to last until at least 22 February in England.

Nobel laureate Sir Angus Deaton lead the review for the Institute for Fiscal Studies (IFS), warning the fabric of British society was at threat if they were not addressed after the Covid crisis.

The pandemic has had a disproportionate impact on both ethnic minority groups and disadvantaged communities, the report said – adding that the wealthiest and most highly-educated have been “much better able to ride out the crisis”.

Sir Angus’ review said the government had a “once-in-a-generation opportunity to tackle the disadvantages faced by many that this pandemic has so devastatingly exposed … We now face a set of challenges which we cannot duck.”

0 0 0 0
Previous : ‘Everywhere is the office’: A day in the life of travel writer Simon Calder
Next : The Trump Presidency – Part Six: Twin tragedies in Las Vegas and Puerto Rico