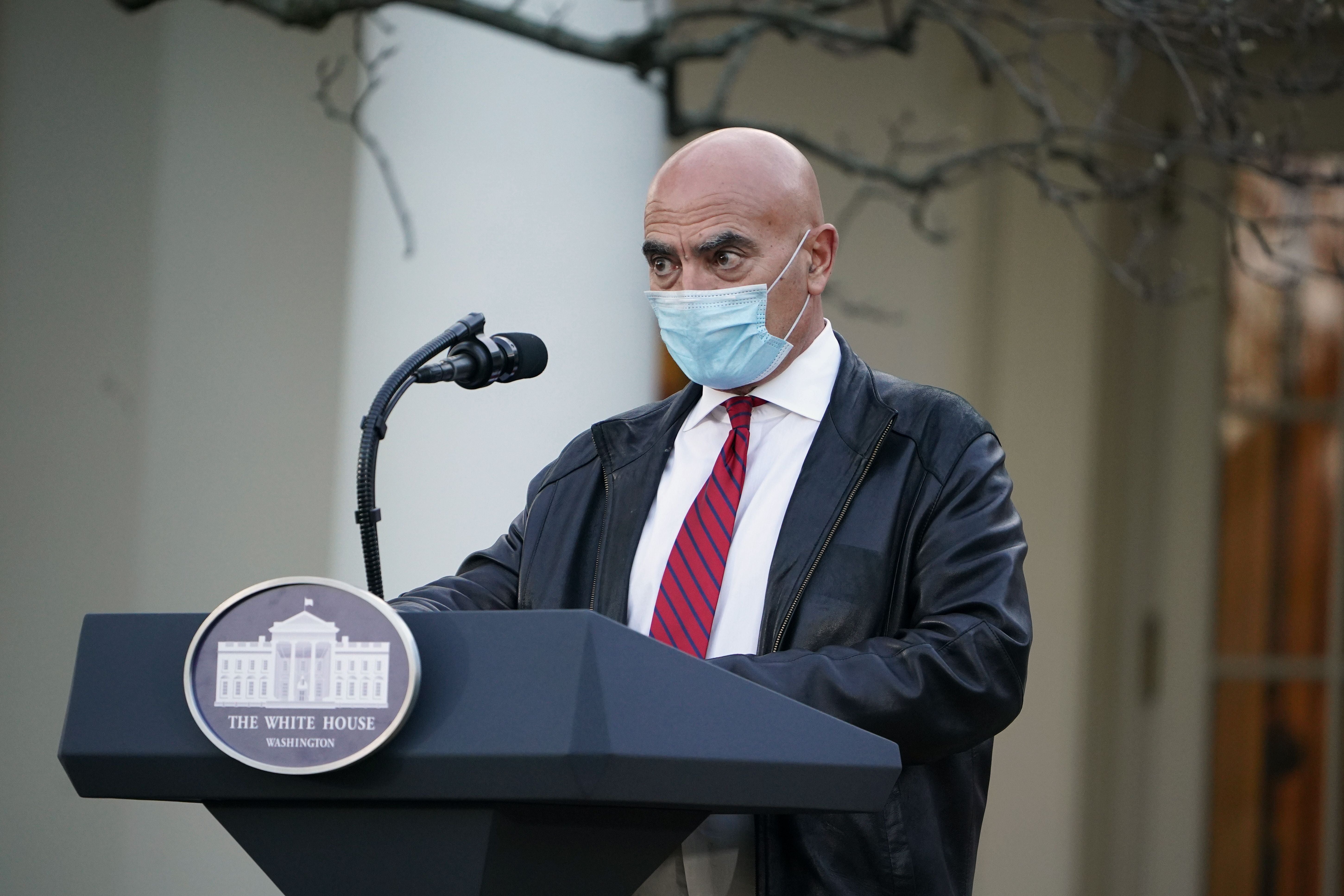 An adviser to Operation Warp Speed, the Trump administration’s programme for vaccine allocation and distribution, has admitted there was a “lag” in administering Covid-19 vaccinations across the United States compared to what was initially expected.

Moncef Slaoui appeared on CNN’s New Day on Monday to discuss distribution and administration of the coronavirus vaccine. He claimed nothing has gone wrong with distribution by the federal government, but only about 4.2 million Americans have been vaccinated compared to the 20 million promised by the end of December.

“Indeed, it is lower than we were hoping for,” Mr Slaoui said, but added the power of administration once vaccine doses reach states was on state governments, not the federal government.

“What we had committed to is to have 20 million doses of vaccine available for the American people to be immunized,” he added, claiming it was never said that many Americans would receive the vaccine by the end of 2020.

CNN’s Alisyn Camerota then showed a compilation of members of the Trump administration, including Mr Slaoui, promising that 20 million Americans would be vaccinated in December.

“Yes obviously I did say that [20 million Americans would be vaccinated] and that was our hope,” Mr Slaoui said.

The conversation then turned contentious after Mr Slaoui was asked if the federal government was “washing its hands” of vaccine distribution once the doses were delivered to states. He claimed that was not the case.

“We can’t decide where to help them,” he said, claiming states needed to figure out where vaccines should go once they’re received. But Mr Slaoui said the federal government would continue to work with the states and implored them to seek help from Operation Warp Speed if needed.

“We, up to now, have made the strategic decision to work through the states … no state’s health department has told us this is the wrong approach,” he said.

Just over 4.2 million Americans have received the first dose of the coronavirus vaccine and more than 13 million doses were sent by the federal government to states, according to the Centres for Disease Control and Prevention (CDC).

What was causing such a delay in getting the vaccine into the arms of Americans remains unknown, but it’s raised concern that essential vaccine doses could expire before they are used.

“No excuses – we’re not where we want to be, but hopefully we’ll pick up some momentum and get back to where we want to be with regard to getting it into people’s arms,” Dr Anthony Fauci, director of the National Institute of Allergy and Infectious Diseases, told NBC’s Meet The Press on Sunday.

In recent days the pace has picked up, and Mr Slaoui said about 500,000 doses were administered each day to Americans.

Currently states are distributing vaccine doses to healthcare workers and people living in long-term care facilities, as they are most at-risk. But experts say that a fast and effective distribution campaign could allow for a broader range of the public to have access to the vaccine in the coming months – pending administration of the doses goes better.

New York Governor Andrew Cuomo said on Monday he would fine hospitals up to $100,000 from now on if they did not distribute their vaccine inventory within seven days of receiving those doses. If they fail to do so, those hospitals could also be disqualified from future vaccine allocations.

“Some hospitals do 99 per cent of allocation, they’re much better at administering. I want to get needles in arms,” Mr Cuomo said. “If you can’t do that within seven days, then raise your hand. I’d rather have the faster hospitals [administering doses].”

0 0 0 0
Previous : Boris Johnson forced to close schools a day after declaring them safe for pupils
Next : ‘Whining and complaining’: Biden tells Georgia voters he doesn’t understand why Trump wants to keep his job