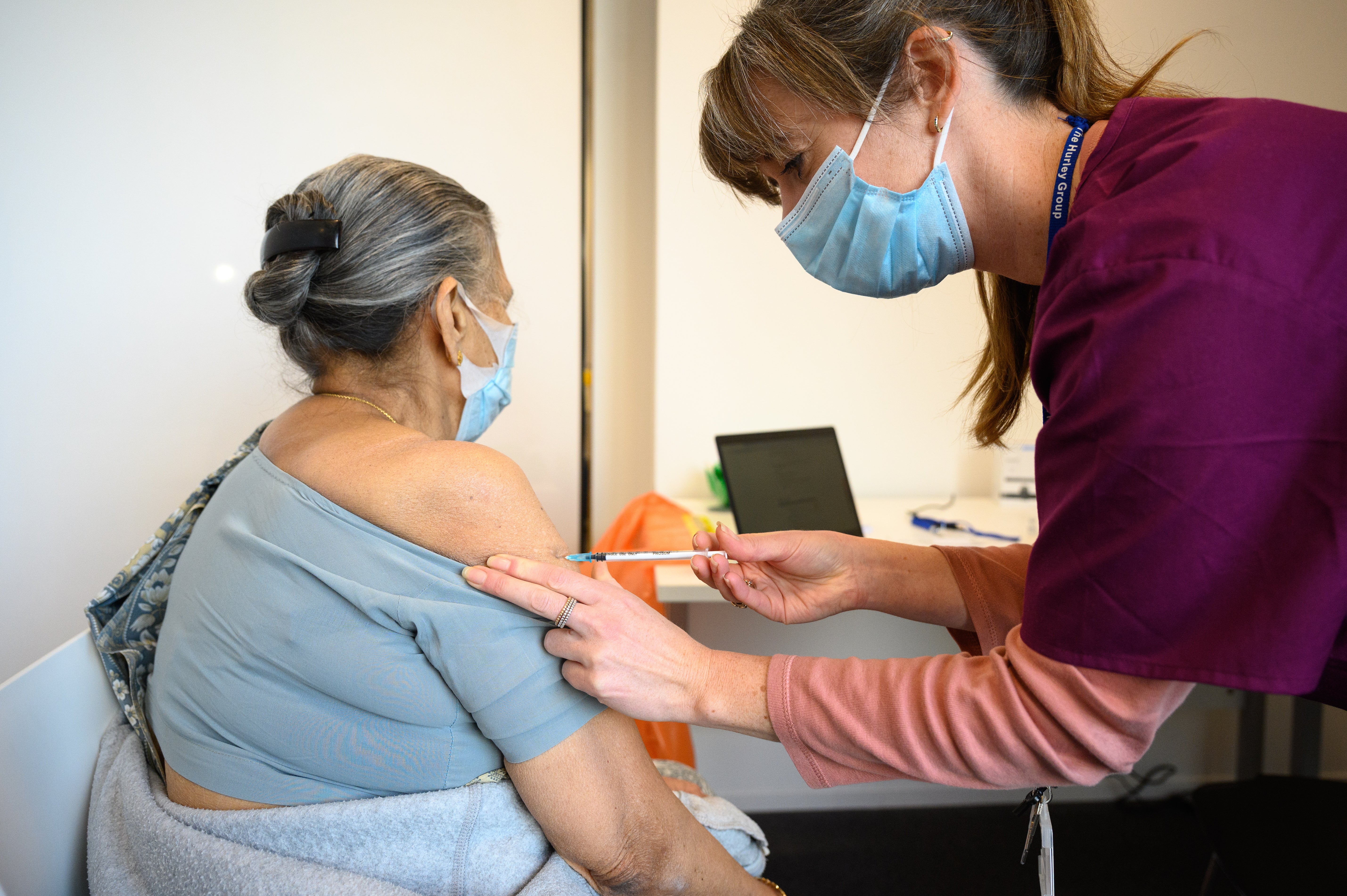 Doctors on the front line of the UK’s vaccine programme have said they are “ready to go” and will be able to administer doses “very quickly” in the months ahead, amid questions over whether or not the NHS can inoculate 2 million people a week.

After suggestions that staffing constraints could hinder the roll-out of the Oxford/AstraZeneca vaccine, which was approved for use last week, NHS officials and GPs have insisted that the health service is primed to deliver doses as soon “as supply becomes available”.

On Monday, Professor Stephen Powis, national medical director of NHS England, said 100 hospital hubs and 700 vaccination centres – based in GP practices and other community settings – would have access to the vaccine by the end of the week, with plans in place to expand the programme.

A total of 530,000 doses are ready to be delivered to the UK’s most vulnerable – adding to the 1 million people who have already received a first jab.

Initially, 30 million doses were set to be manufactured by September in preparation for the roll-out – a target that was later changed to four million by the government’s vaccine taskforce.

However, the health secretary, Matt Hancock, admitted last week that just over half a million doses of the Oxford vaccine were available for distribution, adding that supplies would be rapidly increased.

The shortfall has prompted concern that the government may struggle to deliver on its aims of inoculating by April the approximately 30 million people who make up the UK’s priority list.

Labour said that “ministers should be going hell for leather to get 2 million jabs a week distributed as soon as possible and then scale up further”.

Last week, the prime minister, Boris Johnson, said supply is the “limiting factor”, while Britain’s four chief medical officers warned that “vaccine shortage is a reality that cannot be wished away”.

And in a letter sent to GPs last week that was seen by The Independent, Sir Simon Stevens, the head of NHS England, warned that there is “still some unavoidable uncertainty about the week-by-week supply phasing”.

The claims sparked a sharp response from the UK’s vaccine manufacturers, which insisted that doses are being delivered to the timetable agreed with the government.

Pfizer said the number of doses it has now sent to the UK is “in the millions”, while Pascal Soriot, the chief executive of AstraZeneca, said last Wednesday that the company would be ramping up production to provide “1 million doses and beyond” per week.

Meanwhile, The Daily Telegraph reported over the weekend that the NHS had refused to commit to the target of inoculating 2 million people per week because of supply shortages and issues of logistics, citing the need to enrol an army of volunteers and prepare vaccination sites.

The NHS rejected the report, saying the “main barrier to delivery will be availability of the vaccine”. A spokesperson added: “It is completely untrue that staffing constraints are currently standing in the way of vaccine rollout.”

GPs on the front line have similarly told The Independent that the NHS is fully prepared to deliver the largest vaccination programme seen in the UK’s history.

“We do this for flu vaccine every single year,” said one GP based in London. “They’re trying to blame the workforce capacity for the lack of vaccine. It’s an absolute fallacy. This is purely about supply.”

The GP said his practice, which cares for 30,000 patients, had already given a first dose of the Pfizer vaccine to 1,000 people over three days. For influenza, he said the surgery was capable of vaccinating the same number of people in just one morning.

“The numbers sound a lot when it’s on a population level, but if you break it down by practices, it’s not that many per GP.

“It can be done very quickly. We don’t need all these people drawn in to mass vaccination centres and getting staff back in. We’ve got the staff; we’ve got the space; we’ve got the resources – we just need the vaccines. It’s as simple as that.”

Another GP said that she and her colleagues were “sitting waiting to be instructed as to when we can start”.

“The NHS can deliver this,” she said. “We have already been set up to deliver over 10 million flu jabs to the 50-64 year olds. I am confident with the right financial and manpower support we can deliver the Covid vaccines.”

She admitted that the IT system used to process patient data “isn’t fit for purpose” and needed to be improved, but added that the Oxford vaccine – which can be kept at fridge temperatures – would not pose the same logistical and storage issues as the Pfizer/BioNTech candidate.

A third doctor, based in Newcastle, said she was unsure what was causing the supply “blockages” and insisted she’d be willing to volunteer “any free day, or evening and night if we move to [a] 24/7” roll-out. “However, at this point no one has taken me up on the offer which is incredibly frustrating.”

Separately, the Royal College of GPs has said the UK’s “jabbing workforce” would require a significant boost in order to scale up the nationwide vaccination programme.

Retired doctors, military personnel and midwives could all be signed up, with Mr Hancock promising on Monday to “streamline” the recruitment process, “because at the moment the NHS, with the people that it has got already, is able to deliver the vaccine as it can be produced, but obviously I want to make that easier”.

“Ministers should be going hell for leather to get 2 million jabs a week distributed ASAP and then scale up further. We know this virus can mutate and could well do so again. We are in a race against time and there is not a moment to lose.”

At this stage, the NHS is carrying out 250,000 vaccinations per week but, according to research from the London School of Hygiene and Tropical Medicine, this figure needs to rise to 2 million to prevent a third wave of Covid-19.

The time taken to assess each batch of vaccine manufactured by Pfizer and AstraZeneca has also been attributed to the shortage of supplies seen so far in the UK’s rollout.

The Medicines and Healthcare products Regulatory Agency (MHRA) said it had “scaled up” its review process.

“The MHRA is fully scaled up to do the batch testing that’s so important for confidence as the new products come through,” said Dr June Raine, chief executive of the agency.

“It’s a supply chain that goes right back from the manufacturer, right through to MHRA, and then on to the clinical bedside or where the vaccines are delivered, so we are a step on the road but our capacity is there, I’m very clear about that.”

While about 530,000 doses are to be available from Monday, the Department of Health and Social Care said tens of millions more are to be delivered in the coming weeks and months once batches have been quality-checked.

0 0 0 0
Previous : OECD warns governments against new round of austerity in wake of pandemic
Next : Mark Dolan | 04-Jan-21