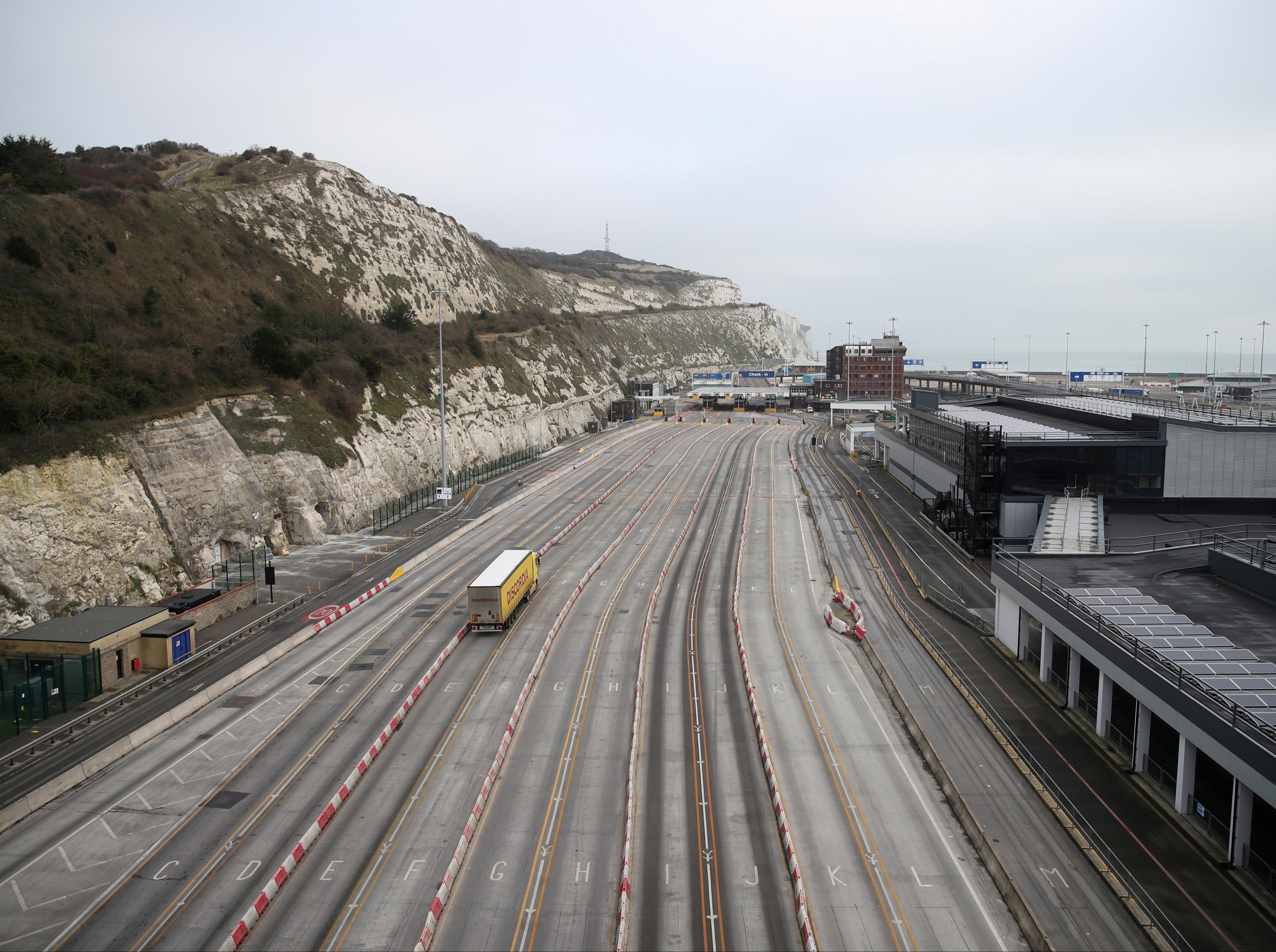 On the day Britain left the EU, Dover fell silent. Aside from the occasional meandering vehicle, the town’s port remained vacant. Ferries drifted soundlessly across the still, gleaming sea and into the mists that obscured the continent.  Even the winds that frequently batter the coast appeared to let up in deference to the symbolism of it all. With decades’ old agreements torn up and replaced by a trade deal agreed just days beforehand, the scene couldn’t be further from the chaos some had predicted in the months before – or even the disruption of a week prior.

On the clifftop above, a pre-recorded message to tourists from a talking telescope played on loop with a robotic twang. “Dover, with its history going back more than 4,000 years, is the busiest passenger ferryport in the world”, it said, free from the context of the scene below. “Set in and around the valley of the river Dour, and its famous white cliffs, Dover has always been in the frontline of history.”

The town has found itself on that frontline yet again in the Brexit debate. It wasn’t among the biggest leave-voting constituencies – although a significant 62 per cent voted to get out of the EU – but as a major thoroughfare for freight, and a potent symbol of the nation and its borders, it has remained a talking point throughout the debate. Over the past half decade, groups from both sides have been compelled to turn up to project statements onto the blank canvas of the cliffs, be they tabloid newspapers declaring “See EU Later” or pro-remain pressure groups shining promises to return onto the chalk. On the bright afternoon of 1 January, however, the cliffs are mostly occupied by dog walkers and bird watchers taking in the serenity of a day that had the potential to play host to unprecedented chaos.

“It’s rather lovely actually because normally there’s a lot of noise coming from there”, said Michael Hutchison, who joined friend Ros Newington for a walk along the cliffs. “Especially with all the lorries over the last week or so”, she adds, a reference to the disruption across Kent caused by the Covid-related closure of the border by French officials, “It’s been horrid.” Both in their 60s, they had voted to remain but were glad a deal had been brokered. Despite their pragmatism however, they were not convinced by the quiet of the day. “It’s a calm before the storm”, said Ms Newington.

Back when Britain leaving the EU without a trade agreement remained possible, the predictions for the coming weeks and months were dire. Trucks would pile up along motorways, food supplies would be obstructed, and the nation’s economy would take a significant hit as disruption caused havoc to trade. A taste of the predicted stasis was felt when France closed off borders with the UK to limit the spread of a new strain of Covid-19 – with travellers now forced to take a test before crossing the channel.  Introduced on the 21st, the backlog of hauliers was mostly cleared by Boxing Day, even with very few proving to be positive for the virus on the way out.

However, far from being overrun on the nation’s first day out of the EU, ferry services like those operated by P&O were cancelled due to low demand. The small number of hauliers arriving were waved through with relative ease, and the seafront played host to many more families and picnickers than it did truckers. The longest queues to be seen along the coast were made up of socially-distanced locals looking to buy a coffee from street vendors.

This was not unexpected – the first days of the new arrangement were unlikely to put a strain on the port. Many hauliers were expected to stay away from the borders as the new customs controls set in, while Christmas stockpiling and excess supplies at retailers were predicted to mean limited demand. Just over 2,000 trucks passed through between Thursday and Friday morning, around a third of the daily average for a port that saw 2,397,270 hauliers in 2019.

Heading into the port, as has often been the case over the past year, Covid-19 posed a much more direct issue than Brexit. Those hauliers who had stopped by the pop-up coronavirus testing centre at Manston airfield handed over a negative result to the police standing watch at the entry to the port, who in turn waved them through. Those yet to be checked were, sympathetically and with the help of a large laminated sign bearing the airport’s postcode, turned away. Mateusz, a polish haulier in his 30s arriving at the port, said getting tested and being given the all clear took him about an hour in total. Even the journey causing him little trouble. “Now it’s easy” he said. “Because it’s new year, people are staying home.” Instead, his concern lies with the potential for disruption when business returns to normal after the Christmas lull, with hauliers and commuters returning to the roads. He was not disrupted today, but he remains sceptical about the future. “Brexit is not good for British people, I think,” he added before driving into the port.

In Folkestone, a few hundred trucks passed through the Eurotunnel over the course of the day. The four who were turned away were denied not because they had fallen foul of customs checks, but because they had failed to produce coronavirus test certificates. John Keefe, a spokesperson for the tunnel, watched as the first haulier passed through under the new regime. “It was really quite strange”, he said. “Very quiet, very tranquil. Everybody was holding their breath as to what was going to happen and it just went as it was meant to.”

So far, so good, but how the system will work under strain remains the question. The UK has said it will not roll out full checks on incoming goods for six months, while Calais has developed new infrastructure to make the process easier – but both sides saw disruption during trials in the months leading up to 2021. Industry representatives at the Road Haulage Association have said it is preparing for the invisible chaos caused not by tailbacks, but by drivers being turned away for not having the right paperwork. With hours to go before Brexit settled in, the number of truckers to have applied for permits to allow them to enter Kent and cross the Channel stood at 450, with the number that pass through the county and onwards on an average day closer to 10,000. Day one was smooth sailing – now on to the future.