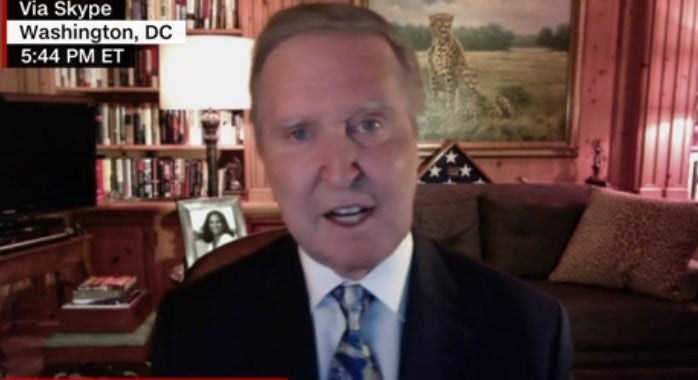 A former Republican senator and defense secretary has suggested it may be time for moderate conservatives to form a new political party as he launched a withering attack on the lawmakers supporting Donald Trump‘s bid to overturn the election result.

William Cohen, who represented Maine before taking up the defense role in the Clinton administration in 1997, said there is now “a real division” within the GOP and compared Mr Trump’s backers in Congress to circus elephants trying to please their “ringmaster”.

Despite losing both the electoral college and popular vote, Mr Trump and his legal team continue to insist that the election was “rigged”. But Trump team is yet to present any credible evidence that mass voter fraud took place on election day.

A number of Republicans in the House of Representatives have declared that they will challenge Mr Biden’s victory when Congress meets to certify the result next week.

Senator Hawley’s announcement made him the first GOP lawmaker in the second chamber to voice support for the defeated president’s efforts to subvert democracy.

Announcing his decision, Mr Hawley claimed that Pennsylvania did not follow state election laws and said the “unprecedented effort of mega corporations” like Facebook and Twitter interfered with the election to support president-elect Biden. He also urged Congress to investigate allegations of voter fraud.

Crucially, Mr Hawley’s backing means that both the House and the Senate will now be forced to debate the results of at least one state and vote on whether to accept Mr Biden’s win.

It will not change the outcome of the election, but it sets up a scenario that Senate majority leader Mitchell McConnell wanted to avoid, saying it would be highly damaging for the party.

Speaking to CNN on Thursday, Mr Cohen, 80, suggested that “maybe it’s time for a new party”, when asked about the state of the GOP and the power Mr Trump continues to exert over it.

“[A party] that abides by the rule of law, abides by balanced budget opportunities, fiscal responsibility. A party that is faithful to the people of this country who vote to elect them,” a visibly annoyed Mr Cohen added.

Mr Cohen also lashed out at those Congressional Republicans emboldening Mr Trump’s bid to frustrate the will of the American people, suggesting they will be forever indebted to a president who “cannot be satisfied”.

“The current occupant of the White House is a ringmaster, and what he expects to do is to snap his whip and all the elephants jump on the chairs,” he said.

He added: “And every time they are going to have to sit on that stool in order to satisfy him and his supporters”.

Mr Cohen also called on a number of more moderate Republicans including Mitt Romney (Utah), Susan Collins (Maine) and Ben Sasse (Nebraska) to do everything in their power to oppose the senators backing Mr Trump.

Mr Sasse was one of those Republicans who called out Mr Hawley’s move to delay certifying the Congress vote as he urged his colleagues not to follow suit.

Writing on Facebook, he said: “The president and his allies are playing with fire. They have been asking – first the courts, then state legislatures, now the Congress – to overturn the results of a presidential election.

“They have unsuccessfully called on judges and are now calling on federal officeholders to invalidate millions and millions of votes. If you make big claims, you had better have the evidence. But the president doesn’t and neither do the institutional arsonist members of Congress who will object to the electoral college vote.”

Mr Trump welcomed Mr Hawley’s support. “America is proud of Josh and the many others who are joining him,” he tweeted yesterday. “The USA cannot have fraudulent elections!”