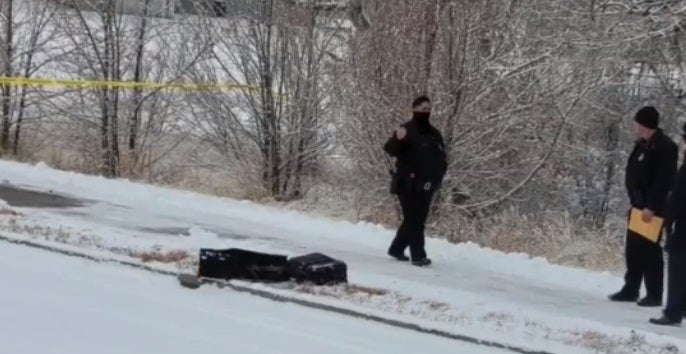 Man’s remains found cut up in two suitcases in Denver

A man’s remains have been found cut up inside two suitcases on a residential street in Denver, Colorado.

Denver parks and recreation employees reported two suspicious-looking travel bags while ploughing snow near the Sanderson Gulch Trail in the Mar Lee neighbourhood at around 7.15am on Tuesday.

Officers responded to the scene near the 1700 block of South Java Way in the southwest of the city.

They found human remains inside the two holdalls, which had been dumped on a footpath at the side of the road, Denver police lieutenant Matt Clark said at a press conference on Wednesday.

The exact age and identity of the deceased have not yet been confirmed and the circumstances surrounding his death are unclear.

Denver police have launched a homicide investigation but are yet to identify any suspects.

Mr Clark said the force is not aware of any missing person reports in the area.

“At this point, I don’t have anybody to connect directly to this incident”, he said.

“We are working to recover footage that was captured by private residential security cameras.”

Anyone with information about any of the crimes is being asked to call Metro Denver Crime Stoppers at 720-913-7867 or report anonymously online at metrodenvercrimestoppers.com.

0 0 0 0
Previous : Power to the people: A year of activism on the streets of London | The Independent
Next : Sportmix: Pet food recalled after 28 dogs die, FDA says