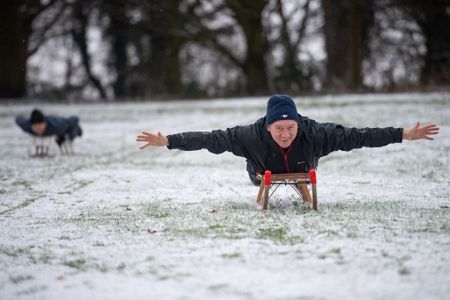 UK weather: Freezing temperatures and snow to see in the New Year

The UK will see in a freezing New Year with icy conditions forecast for much of the country as the clock strikes midnight.

Rain, sleet, and snow will move south across the country throughout the day with the possibility of wintry showers in Northern Ireland, Wales and western England.

Scotland will see highs of just 1C, but will feel much colder.

Sunny spells mean New Year’s Day is less likely to be a white one in the south, although freezing fog will be present to bring a festive feel.

In the south and the Midlands, the temperature highs will be just 2C.

The Met Office has yellow weather warnings in place for ice and snow parts of Scotland, north Wales and north England, which is likely to lead to some travel disruption.

North Wales Police advised motorists to avoid all non-essential journeys as officers dealt with several collisions on the A55 amid dangerous conditions caused by snow and ice.

Parts of Merseyside were already covered in snow, which fell in previous days but has yet to melt as temperatures stayed below freezing.

The snow and ice weather warning will clear by mid-afternoon on 31 December, leaving the first day of 2021 weather-warning free.

Wednesday saw the coldest night of the winter so far, with a low of minus 10.2C recorded in Dalwhinnie in the Scottish Highlands.