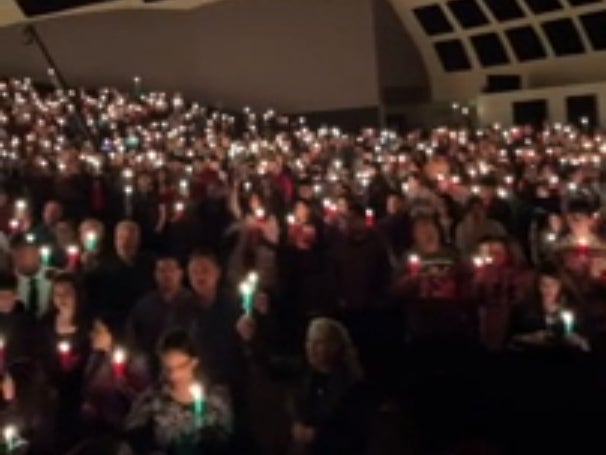 Legacy Church and Calvary Church in Albuquerque were sent notices by New Mexico’s Health Department on Monday, which informed them of their $10,000 fines.

The department said it is also deliberating over “other remedies” to prevent the churches from hosting large turnouts in the future that are in violation of New Mexico governor Michelle Lujan Grisham’s coronavirus order.

The investigations by the state department were launched after videos and pictures from the churches Christmas eve services were spread across social media last week.

The footage and photos showed hundreds of worshippers at both churches ignoring social distancing measures, while many of the attendees were seen not wearing face masks, according to NBC News.

In a statement released after the fines for the two megachurches were announced, the governor criticised the gatherings.

“In violating both the state public health order and common sense, these two churches and their leaders endangered the lives, livelihoods and health of not only their parishioners but their entire communities,” Ms Grisham said on Wednesday.

The governor added that “given how quickly this virus can spread,” the gathering potentially endangered “our state as a whole.”

The fines came as New Mexico appeared to be slowing down the spread of the virus in the state, after a dramatic rise in cases over the last two months.

New Mexico reported 1,141 new cases on Sunday, which was a large decrease from its daily peak on 23 November of 2,672 positive tests, according to ABC News.

Since the start of the pandemic, New Mexico has recorded more than 140,000 coronavirus cases and at least 2,405 deaths.

“We all wish this pandemic were over, but it’s not, and no pro-virus pastor may deem it so. So many New Mexicans have sacrificed — and lost — so much in this pandemic,” Ms Grisham said in the statement on Wednesday.

“These illegal and selfish gatherings will directly contribute to more suffering and illness in our state. These church leaders should reflect on the danger they’ve unleashed in their communities,” the governor added.

In a statement to NBC on Wednesday, Legacy Church said that the authorities were exceeding “their constitutional authority” and contradicting “what we are called on by God to do.”

The church added: “It’s tragic that what we do for thousands of shut-ins, those in despair, and kids who go without meals gets no state notice, but fixation on one service can net us large fines.”

While in a statement to ABC, Calvary Church said that after a large group of people turned up for their Christmas eve service, they “chose not to break fellowship with any worshipper by requiring them to leave the gathering of their church family.”

The church added: “Instead, we continued to urge and provide opportunity for our congregants to maintain safe social distance, wear face coverings and properly sanitize.”

According to Johns Hopkins University, there are now more than 19.7 million people who have tested positive for the coronavirus in the US. The death toll has reached 342,414.