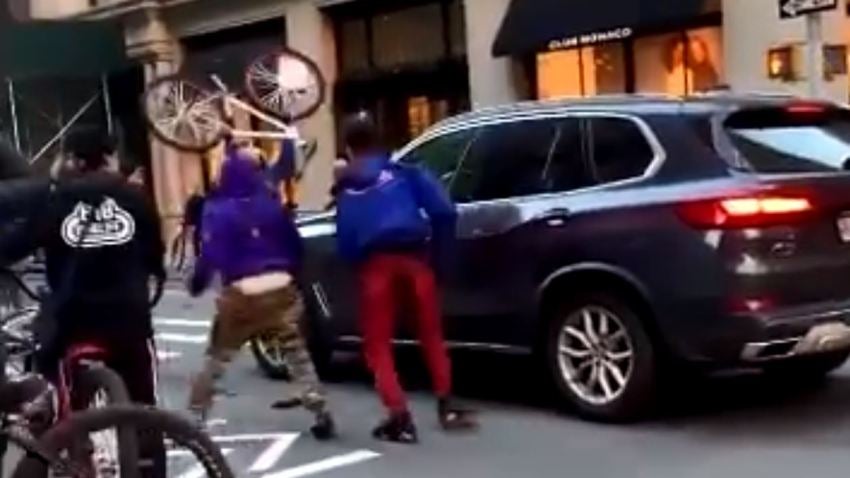 A 15-year-old has been arrested in connection with an incident in which a gang of teens on bikes attacked a luxury SUV in the middle of New York City.

The boy has not been identified because he is a minor. A second teen involved in the attack was also identified by police and is being sought.

On Tuesday, the group of teens on bikes were videoed surrounding a BMW SUV in the middle of Fifth Avenue, Manhattan.

Some teens used their bikes as battering rams against the vehicle, the video showed, while one boy was seen jumping on to the hood of the car and stomping on the windshield. Eye-witnesses gave varied reports, saying that the group ranged in size from “dozens” to up to 50 teens.

The driver, Max Torgovnick, said that he was driving his mother through the city when the group of teens set upon his vehicle.

Mr Torgovnick said he feared for his life and for the life of his mother.

He said he is haunted by the terror that his mother felt during the attack.

“All I could hear was my mother crying and screaming. That’s what haunts me the most,” he said. “Before I knew it, my mom is crying. She’s screaming into the phone to the 911 operator, ‘Help! Send help! We are going to die. They are going to kill us.'”

Mr Torgovnick told NBC News that he put his car in park during the attack to avoid injuring the teens. By the time the police arrived, the teens had already fled the scene. The teens caused about $250 in damage to the SUV.

New York Mayor Bill DeBlasio said the attack was “absolutely unacceptable” while speaking at a Covid briefing. He vowed that “there will be consequences.”

NYPD Commissioner, Demot Shea, shared a video of the attack on Twitter and asked for the public’s help identifying the teens involved.

Mr Torgovnick said that he was happy no one was hurt but was confused as to how an attack like that could occur in the first place.

“How nobody noticed 50 bicycles going through major intersections along Fifth Avenue and alerted anybody to try to prevent it,” he said.

“Where did we fail in society to let them get to that point and what can we do to fix things.”