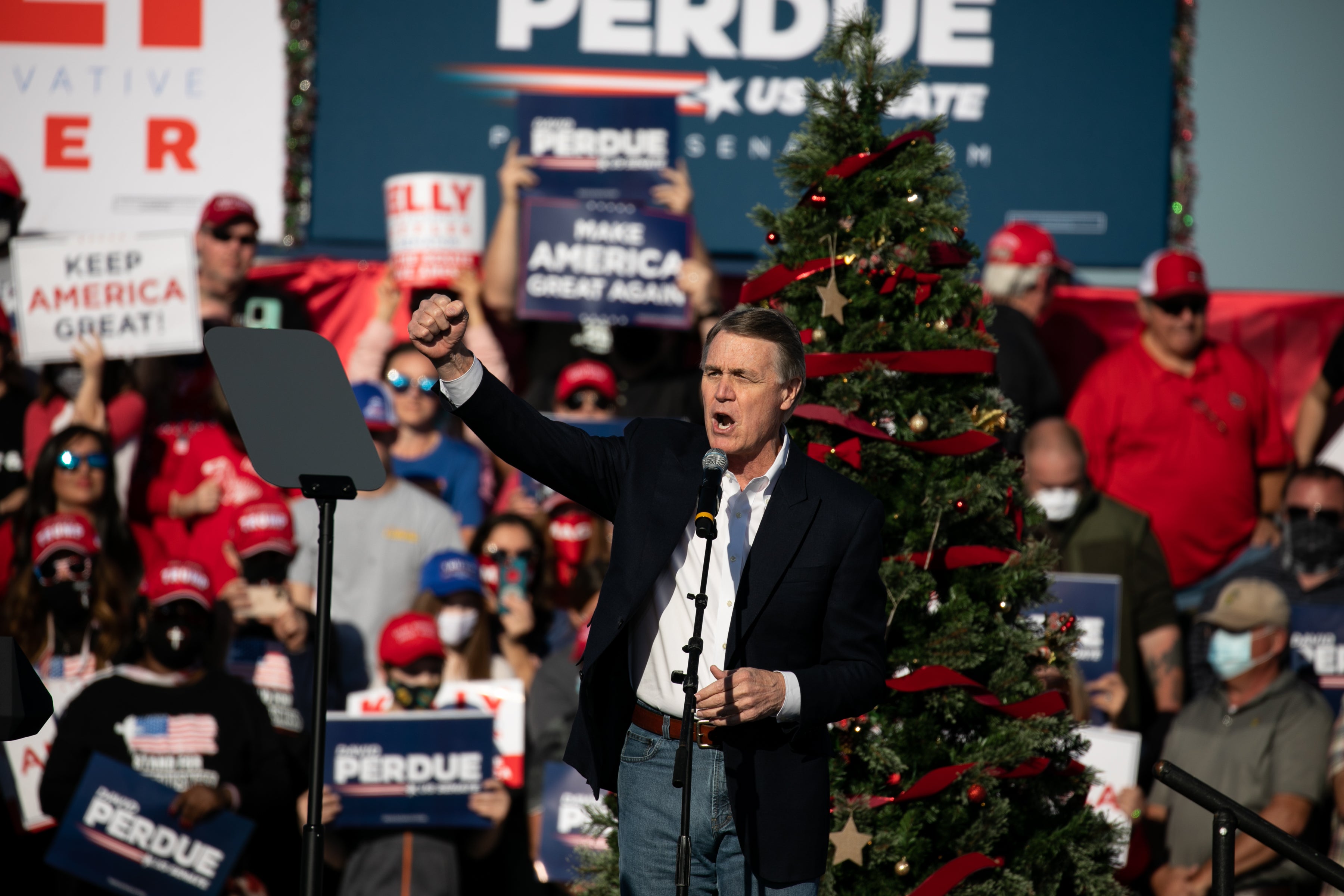 David Perdue: Is Republican senator a Trumpist or a moderate?

David Perdue gave the most memorable performance of his re-election campaign without even appearing in person.

At what was meant to be his third encounter with his Democratic rival, Jon Ossoff, the audience got to see the challenger candidate reel off his criticisms beside an empty podium – because Mr Perdue had declined to take part.

This he did on the premise that Mr Ossoff had “lied repeatedly” at their previous debate, at which Mr Ossoff tore into him for supposedly enriching himself via lucrative stock trades during the early days of the coronavirus crisis.

He may have avoided another face-to-face run-in, but by handing his opponent a chunk of airtime in which to condemn him uninterrupted just before early voting began, Mr Perdue did not help his image. And Mr Ossoff did not waste his chance.

“I truly regret that we haven’t had the opportunity to debate the issues, because the people deserve it,” he said. “It shows an astonishing arrogance and sense of entitlement for Georgia‘s senior US senator to believe he shouldn’t have to debate at a moment like this in our history.”

Mr Perdue chose to keep his head down after being badly hit by Mr Ossoff during the two men’s first one-on-one debate in October, and during a runoff campaign that’s put him under incredible pressure to hold his seat – in a political climate completely different to the one in which he was elected.

The first cousin of former Georgia governor Sonny Perdue, he ran his 2014 campaign as a political outsider. He traded heavily on his record as a Fortune 500 CEO, netting a major sponsorship deal at Reebok and setting up some 2,500 new stores at Dollar General, and pushing heavily on the idea that a businessman could do for Georgians what career politicians could not. Running as a relative moderate as the Tea Party appeared to lose its grip on the Republican Party, he won the seat handily.

He returned to the “outsider” theme in 2016 when he endorsed then-candidate Donald Trump, getting behind his fellow businessman-turned-politician well after he looked certain to win the Republican nomination.

“Two short years ago,” he wrote back then in the Washington Post, “I was an outsider businessman campaigning for the first time and endured some of the same criticisms being levelled against Mr. Trump today. Through my own experience, I probably understand the Trump phenomenon and the new reality of this electorate better than most …

“The antiquated tactics that were used unsuccessfully against me have been deployed against Mr Trump, and the voters responded in similar fashion. They ignored the preachy pundits, the ideology police, and the Washington establishment. They chose a different type of candidate because they believe to get different results, you have to send a different type of person to Washington.”

Now, of course, Mr Perdue is one of a pair of extremely wealthy incumbent senators (Ms Loeffler is the wealthiest person in Congress) running on the basis that they are all that stands between everyday Americans and an onslaught of radical socialism. In one ad run jointly with Ms Loeffler, he catches a football from her and declares that “If the radicals take total control, we’ll never get our country back.”

But where Ms Loeffler has steered her campaign hard to the right – running a racially tilted campaign against her Black opponent, Raphael Warnock, and appearing alongside QAnon-supporting congresswoman Marjorie Taylor Greene at an event attended by a far-right militia group – Mr Perdue is sticking to the personal style that worked for him in 2014: plain-spoken and amiable, with less of the bile and rage that characterises many Republican campaigns in the Trump age.

To be sure, he is playing many of the same hits as Ms Loeffler, deriding the Democrats as “socialist”, cheerily mispronouncing Kamala Harris’s name in front of a braying crowd and appearing alongside Mr Trump as he rants about the “stolen” election and calls for Governor Brian Kemp to be dethroned.

Bur where Ms Loeffler’s ads caricature Mr Warnock as a threat to the American way of life (“Saving the Senate is about saving America from that,” claims one of them), Mr Perdue’s are mild and pragmatic, like something from a bygone era.

One features a group of middle-aged women sitting around at a coffee-klatch-cum-focus-group, trading approving insights on Mr Perdue’s character and good intentions. “I really just like David,” says one, matter-of-factly. “He’s a good person.”

Others chime in. “David Perdue has done exactly what he said he would do.” “David Perdue is a man of his word.” “He is so well-rounded, well focused. He is looking out for all Georgians.”

The obvious complication for Mr Perdue’s relatively gentle, orthodox style is that by virtue of being a Republican in the first place, he is inevitably yoked to Mr Trump – who lost the state and the country on 3 November in large part thanks to the comfortably-off suburban women the Perdue campaign is targeting with ads like these.

Sure enough, the clip does not mention Mr Trump at all, and alludes only in passing to the supposed Democratic policies of defunding the police and “gutting the military”.

It could have been run by any middle-of-the-road Republican in any election cycle since modern TV political campaign advertising took hold – but it sticks out like a sore thumb in this frenzied runoff, whose will effectively set the trajectory for the first two years of the Biden administration.

Mr Perdue was born in Macon in central Georgia as the son of two schoolteachers.

His father, David Perdue Sr, was a Democrat and the school superintendent for Houston County for 19 years between 1961 and 1980, where he was a part of desegregating the school system. “People were scared to death, everybody was on edge,” Mr Perdue Sr said, according to an article published in late 1980 in The Houston Home Journal chronicling his career.

Mr Perdue’s mother, Gervaise Wynn Perdue, worked as a teacher for over 30 years and started one of Georgia’s first programmes for gifted students. After getting both a bachelor’s and a master’s degree from the University of Georgia, she received an Education Specialist degree from Mercer University in 1971.

They were married for 49 years.

Mr Perdue married Bonnie Dunn in 1972 after meeting her in first grade. The couple has two sons, Blake and David Perdue III, and three grandchildren. They also had a daughter who died in infancy.

If Ms Loeffler is trying to win her race by turning up the heat, Mr Perdue is trying to keep things lukewarm. In Mr Ossoff, he faces a barnstorming, sharp-tongued upstart in the mode of many post-Obama Democratic challengers; other grey-haired, low-key Republicans facing similar threats have lately declined to engage them too directly for fear that the contrast might become too sharp.

Or, indeed, for fear that the other side might land a devastating blow. That is just what happened at the first Ossoff-Perdue debate, when Mr Ossoff eviscerated him in a monologue that went viral on the brink of polling day.

“It’s not just that you’re a crook, senator,” he said. “It’s that you’re attacking the health of the people that you represent. You did say Covid-19 was no deadlier than the flu. You did say there would be no significant uptick in cases. All the while you were looking after your own assets and your own portfolio.

“Can you look down the camera and tell the people of this state why you voted four times to allow to deny us health coverage because we may suffer from diabetes, or heart disease, or asthma, or have cancer in remission? Why, senator?”

Throughout Mr Ossoff’s attack, Mr Perdue stared into the camera, shifting uncomfortably from side to side. And just days later, after months on the trail trying to avoid a runoff, it became clear he had been forced to fight for his political life all over again.