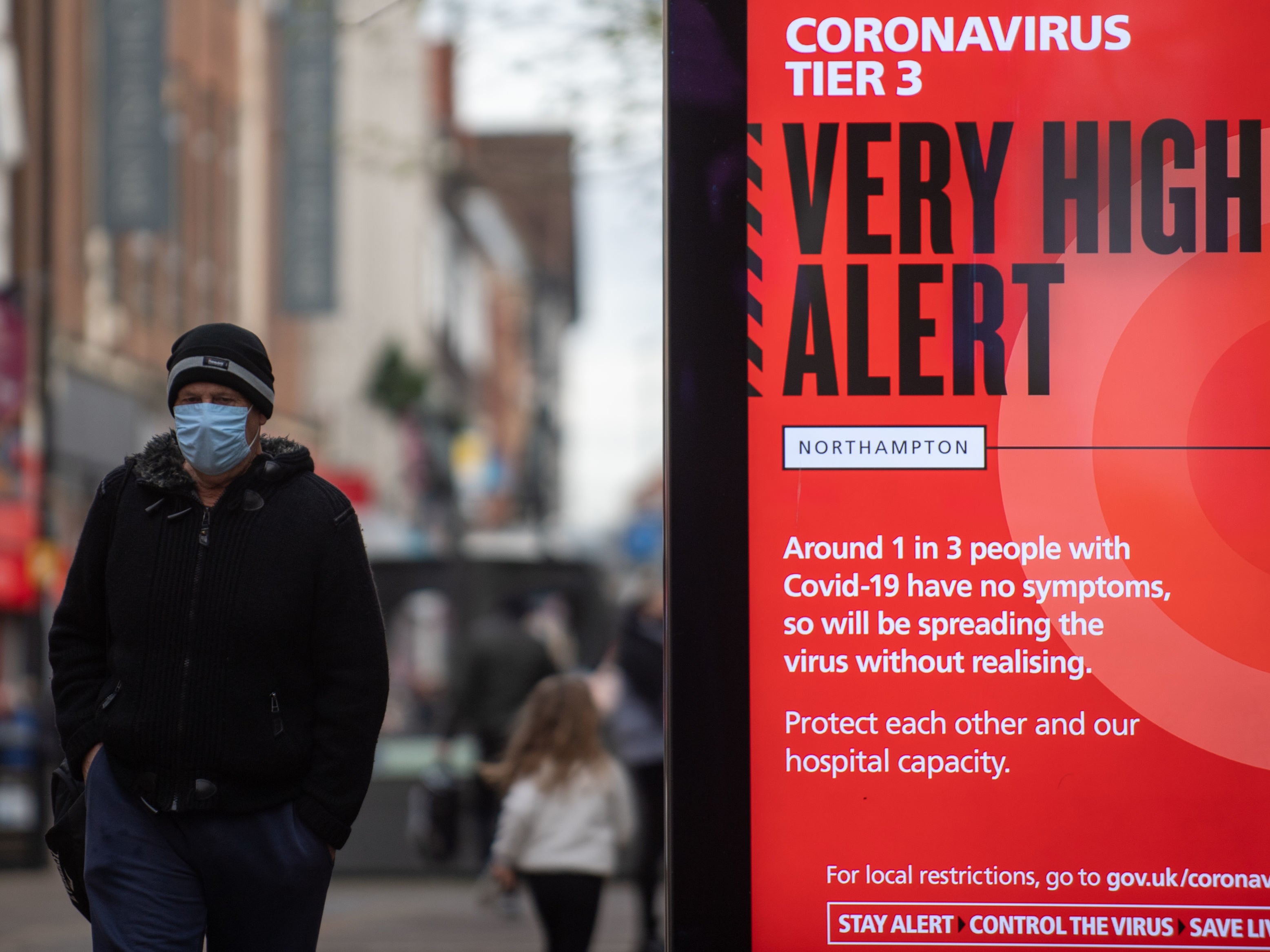 Police have warned that large New Year’s Eve parties “should not be happening”, with the vast majority of the population reminded that indoor mixing between people from different households will be illegal. The organisers of gatherings of more than 30 people could be punished with £10,000 fines.

It comes as more than three quarters of England’s population has been ordered to stay at home to stop then spread of the virus, with large areas of the country placed under tier 4 restrictions overnight.

It leaves a total of 44 million people, or 78 per cent of England’s population, in tier 4, where non-essential shops, gyms, cinemas, casinos and hairdressers have to remain shut.

Greater Manchester mayor Andy Burnham joined calls for people to celebrate New Year’s Eve safely, before warning “this is the moment of maximum danger” as the region prepares to enter a period of tier 4 restrictions.

Meanwhile, critically ill patients are being “evacuated” from hospitals in the south of England as they struggle to provide enough critical care beds.

It is understood that NHS England will announce plans today to reopen the Nightingale Hospital, in east London’s Excel conference centre, on 4 January.

And the defence secretary, Ben Wallace, has said up to 250 teams of combat medics could be made available to help deliver the Covid-19 vaccine rollout across the country.

China has detected its first imported case of the new coronavirus variant that is spreading rapidly around the UK, according to a publication run by the Chinese Center for Disease Control and Prevention (CDC).

Countries around the world have cut off travel links to Britain to stop the spread of the new variant, which scientists have said is 40-70 per cent more transmissible than the original virus.

The variant was detected in a 23-year-old female student returning to China from Britain, who was tested in Shanghai on 14 December, according to the latest edition of China CDC Weekly published yesterday.

The case “poses a great potential threat to the prevention and control of Covid-19 in China”, the publication said.

A nurse in Indonesia has been suspended for removing his personal protective equipment to have sex with a Covid-19 patient in the hospital, Mayank Aggarwal reports.

The Labour mayor warned people not to treat the arrival of vaccines as a return to normality as he said he supports the decision to move Greater Manchester into tier 4 from tomorrow.

A leader of the UK’s biggest education union has cast doubt on the government’s plan for the reopening of secondary schools,  questioning the effectiveness of testing students and the amount of time given to prepare.

Kevin Courtney, joint general secretary of the National Education Union, responding to education secretary Gavin Williamson’s  announcement that he is “absolutely confident” schools will be able to set-up a mass testing regime in less than a fortnight, said: “Serious questions have to be asked about the government’s plans for lateral flow testing in secondary schools and the readiness of schools and colleges to be able to get a system in place by 11 January to administer them.

“This is a very short lead-in time.

“There are also questions about the effectiveness of these tests in identifying Covid infection in young people who are highly likely to be asymptomatic, with the tests being supervised by non-medically trained volunteers.

“We do not think it likely these tests alone can make our schools Covid-secure nor protect the communities they serve.”

Public Health Wales has reported a further 1,831 cases of coronavirus, taking the total number of confirmed cases to 148,537.

Another 65 deaths were recorded in the 24 hours up to 9am on 30 December, taking the total in Wales since the start of the pandemic to 3,494.

Residents of the Isles of Scilly fear “selfish people” will travel to the the only area of England in tier 1 to escape lockdown, Peter Stubley reports.

The islands, which have recorded no Covid cases since September, remain under the most lenient restrictions which allow up to six people to meet indoors – including in pubs and restaurants.

Geoff Barton, general secretary of the Association of School and College Leaders, accused the government of living “in a parallel universe” on the issue of setting up mass Covid testing in schools and colleges.

Mr Barton said: “It is asking them to recruit and train large numbers of staff, and set up testing centres in an incredibly short timeframe.

“The support it has announced is nowhere near being sufficient.

“Ministers need to remember that schools and colleges are educational institutions, not medical facilities, and it has to support this testing programme properly.”

33% increase in positive tests before Christmas

A total of 232,169 people tested positive for Covid-19 in England at least once in the week to 23 December, according to the latest Test and Trace figures.

This is up 33 per cent on the previous week and is the highest weekly total since Test and Trace began in May.

Doctors’ union the British Medical Association (BMA) said advice that first doses of the Pfizer vaccine should be prioritised and second doses be done within 12 weeks was “grossly unfair” for patients whose imminent second jab appointments could be rescheduled.

Dr Richard Vautrey, chairman of the BMA GP committee, said: “This group of very elderly patients is at the highest risk of death if they contract Covid-19, which is why GPs are so concerned for them.

“It is grossly and patently unfair to tens of thousands of our most at-risk patients to now try to reschedule their appointments.

“Local leaders are telling us that is unprofessional and impractical to amend the appointments for thousands of frail elderly patients, particularly those booked and who have already made arrangements to have their second vaccination in the next two weeks.

“The decision to ask GPs, at such short notice, to rebook patients for three months hence will also cause huge logistical problems for almost all vaccination sites and practices.

“For example, to make contact with even just two thousand elderly or vulnerable patients will take a team of five staff at a practice about a week, and that’s simply untenable.

“The BMA believes the existing commitment made to these patients by the NHS and local clinicians should be respected. If GPs decide to honour these booked appointments in January, the BMA will support them.

“The government must see that it’s only right that existing bookings for the oldest and most vulnerable members of our society are honoured, and it must also as soon as possible publish a scientifically-validated justification for its new approach.”

Army has 5,000 deployed in Covid response

Defence secretary Ben Wallace has said the Army currently has 5,000 personnel deployed in the Covid-19 response.

Speaking to Times Radio, he said: “I just authorised last night 133 military planners and personnel to go to the NHS vaccine taskforce to make sure we ramp up delivery of that vaccine in parallel with the stocks as they come online.”

Mr Wallace said the Army could be used to deploy the vaccine in hard-to-reach areas, saying: “The strength and versatility of the Army is being able to get all over the UK and we will be able to do that as well.”

0 0 0 0
Previous : Best animal rescues of 2020, from a fox stuck in watering can to a goat at bus stop
Next : English sparkling wine and Rule Britannia: How Brexiteers will celebrate Brexit