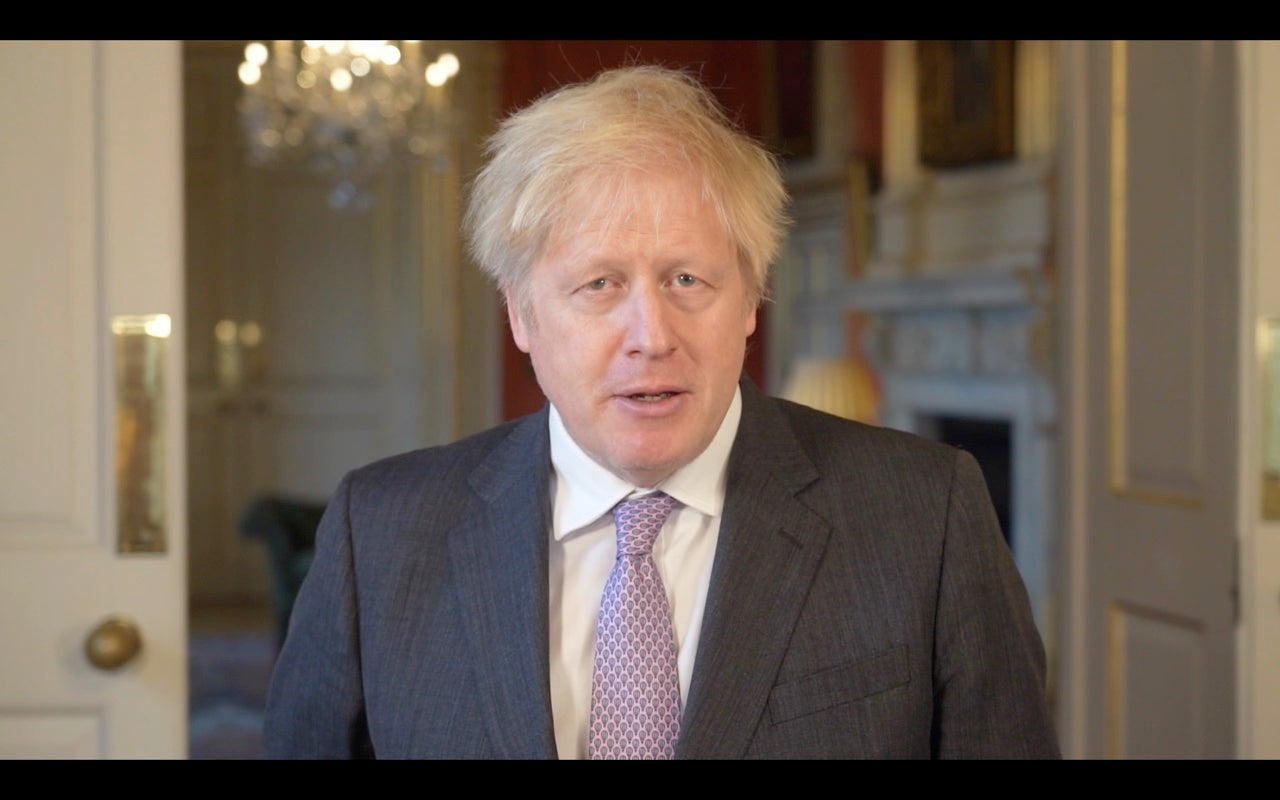 Boris Johnson has said that the move from 2020 to 2021 marks “an amazing moment for this country”, in a New Year’s message broadcast as most of the UK hunkered down at home under coronavirus restrictions.

The prime minister, who was seeing in the New Year with his immediate family at 10 Downing Street, said he was confident that 2021 was the year when the UK will reach “the end of the journey” back to normal life after a 2020 blighted by the Covid-19 pandemic.

And he also said that the completion of Brexit at 11pm on New Year’s Eve, with the UK leaving the EU single market and customs union, would mean that “our freedom in our hands and it is up to us to make the most of it”.

The message was broadcast as the tally of daily coronavirus deaths reached 964, with cases hitting a record 55,892, while newly-released papers showed the PM’s Sage advisers had warned that even a total lockdown may not rein in the virulent new variant of the disease.

Meanwhile, Mr Johnson’s own father, Stanley, revealed he had applied for French citizenship, Tony Blair’s former chief of staff denounced the Brexit process as the UK’s worst negotiation in at least 40 years and foreign secretary Dominic Raab agreed a deal with Spain which could see Gibraltar join the EU’s Schengen open border system.

With the UK chairing the G7 group of major industrialised nations in 2021 and hosting November’s United Nations COP26 climate change summit in Glasgow, Mr Johnson said the year ahead would enable the country to showcase itself as an “open, generous, outward-looking, internationalist and free-trading global Britain”.

Despite projections from his own Office for Budget Responsibility forecasters that a free trade agreement of the kind he reached with the EU on Christmas Eve will knock around 4 per cent off the UK’s GDP, he insisted that Brexit would allow Britain to “turbocharge” cutting-edge sectors like life sciences, artificial intelligence and battery technology and create “millions” of high-skilled jobs.

Brexit will free the UK to strike new trade deals and to “do things differently, and if necessary better, than our friends in the EU”, he claimed, despite clauses in the agreement he signed which allow Brussels to impose tariffs if the UK diverges from its rules.

Despite polls showing majority support for Scottish independence north of the border in the wake of Brexit, the PM said he believed it was the “overwhelming instinct of the people of this country to come together as one United Kingdom – England, Scotland, Wales and Northern Ireland working together to express our values around the world”.

The prime minister said that 2020 had been a “grim” year when the government was forced to tell people how to live their lives and when “we lost too many loved ones before their time”.

But he said it was also “the year when we rediscovered a spirit of togetherness, of community” as people applauded health workers and put their own lives on hold to protect their neighbours and save the NHS from being overwhelmed.

He hailed the key workers who kept the country running as well as the scientists who created treatments for coronavirus and the Oxford/AstraZeneca vaccine which has been approved for use from next week.

“With every jab that goes into the arm of every elderly or vulnerable person, we are changing the odds, in favour of humanity and against Covid,” said Mr Johnson in the video recorded at 10 Downing Street.

“And we know that we have a hard struggle still ahead of us for weeks and months, because we face a new variant of the disease that requires a new vigilance.

“But as the sun rises tomorrow on 2021 we have the certainty of those vaccines, pioneered in a UK that is also free to do things differently, and if necessary better, than our friends in the EU.”

Mr Johnson said: “2021 is the year we can do it. And I believe 2021 is above all, the year when we will eventually do those everyday things that now seem lost in the past, bathed in a rosy glow of nostalgia – going to the pub, concerts, theatres, restaurants, or simply holding hands with our loved ones in the normal way.

“We are still a way off from that, there are tough weeks and months ahead.

“But we can see that illuminated sign that marks the end of the journey, and even more important, we can see with growing clarity how we are going to get there.

“And that is what gives me such confidence about 2021.”

0 0 0 0
Previous : Here’s to Britain’s future – and the beaming nation of happiness Brexit has made us
Next : Britain is broken, can it be healed?