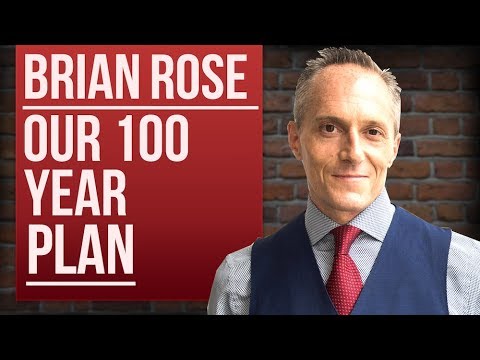 This week on the show, Brian is the guest and our host is Roger Brooks from American Real!

In Roger’s words:
Sometimes life presents opportunities for which we have to act upon. For me, my story in creating American Real is an example.

As a fan of London Real, I became inspired by Brian Rose, and had a burning desire to become a broadcaster and start my very own show. In July 2017, I enrolled into the London Real Broadcast Yourself Accelerator Course and after eight weeks of grueling, yet rewarding tasks, I found myself sitting in Rose’s chair—where once a year he reverses the roles and puts himself in the hot-seat.

With a little over a week to prepare, I flew from New York to London to interview Brian in what would be the final episode in their old studio, before moving to their new world headquarters!

If you want to get to know Brian Rose a little better, settle in because there’s over four hours of epic ROSE GOLD here. Brian goes deep and I press hard, as we discuss the many lessons he’s learned from the best in the world, over his six-year journey. He shares his doubts and fears, what he can improve on and also provides his vision for where London Real is going for the next 100 years.

Before the interview, I asked Brian if any subject was off limits. He said, “Come on, Roger… this is London Real!” And so, I went for it and asked Brian all that I could—what makes him cry, why he pulled the Peter Sage episode and what is was like to create the Ido Portal episode in Israel.

American Real, like London Real, is on a mission to raise global consciousness. Please join us on this wonderful journey!

———-
Chapters:
00:00 Trailer.
01:59 Brian’s thoughts on the episode.
05:42 Roger Brooks’ introduction.
06:41 What it was about Roger that made him the choice for this year’s interviewer.
08:56 The affinity Brian has with London, the birthplace of London Real.
12:44 Was Brian like Leonardo DiCaprio’s character Belfort in The Wolf of Wall Street?
16:07 Valuable lessons learned from Wall Street experience.
17:43 Brian’s early influences growing up in Southern California.
21:10 Brian’s epiphany in Richard Branson’s Swiss chalet.
25:19 What Brian took from his time in the City.
27:30 The journey of London Real from inception to its sixth year.
32:51 Roger experienced Brian’s relentless attitude when participating in the London Real Academy.
35:27 How Brian’s core mission is changing as he looks to his 100 years plan.
46:47 Brian’s praise for Roger and for American Real and Roger shares how it has changed him.
56:00 Positive reaction from London and American Real guests to the long form conversation.
1:01:18 The art of listening.
1:05:42 Brian explains what he means by ‘global consciousness’.
1:15:36 The morning routine that empowers Brian for each day.
1:31:34 The transformational love of Mariana and how together they battled through miscarriages.
1:40:16 How Brian switches off.
1:45:41 Does Brian get angry? How does he reign in his personality traits for the team and guests?
1:52:50 Brian feels more present now than when working as a banker.
1:55:33 The moving conversation.
1:57:46 Experience of being in Israel whilst filming the Ido Portal documentary.
2:09:46 What it feels like when the lights dim on the London Real red carpet premier nights.
2:16:07 Vulnerability plays a key part in the five rules of the London Academy.
2:25:15 The great London Real team.
2:30:25 Psychedelics, the pros and cons.
2:44:02 Each, and every guest broadcast, is a special occasion. Some memorable moments for Brian.
2:52:29 Why Brian pulled the Peter Sage episode.
3:00:32 The importance to Brian of giving free content, and of his time, energy and intellectual property.
3:08:02 Has preparing for or conducting an interview got any easier over time?
3:14:16 Where online courses fall short.
3:18:03 Where Brian finds happiness.
3:19:57 Brian never foresaw how far he has already come, and relishes even greater challenges ahead.
3:22:27 Publish and don’t look back.
3:25:10 Does Brian ever cry?
3:27:28 The characters of the people who inspire Brian.
3:30:16 What Dan Penā forced Brian to do.
3:34:15 What Brian has discovered Fatherhood to be and what he is learning from it.
…and MORE!